Why Are You Still Sending Your Kids to School? A review of Blake Boles' new book

The writer Blake Boles has long been a luminary in the world of Self-Directed Education, having published books such as College Without High School and Better Than College. Now he’s published a new book: Why Are You Still Sending Your Kids to School?, which is a sure upgrade for the arsenals of SDE advocates. 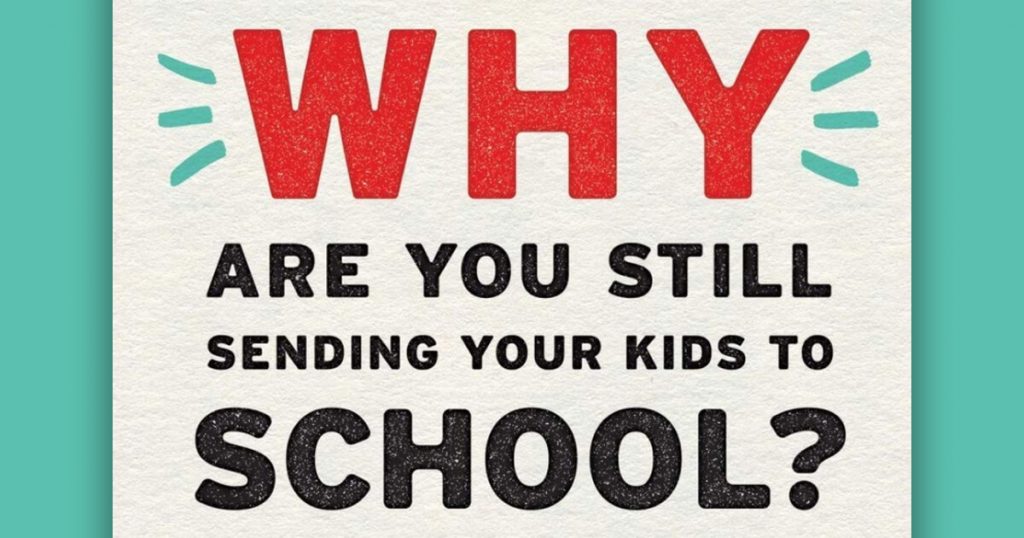 What I like most about this book is its distillation of Blake’s expertise on college. He’s talked to tons of teens who have gone to college after childhoods free of conventional schooling. He tells their stories, and provides a practical guide for teens who want to follow in their footsteps.

A key takeaway from this book is that SDE kids shouldn’t be expected to spend their teen years prepping for college, and parents shouldn’t worry if their kids show no interest in college until their late teens.

“All of a sudden, for one reason or another, your kid finds a very personal reason to go to college—and this is the key that unlocks everything. All of a sudden, those community college placement exams don’t seem so irrelevant. That SAT prep book doesn’t seem so toxic. Khan Academy turns from enemy to friend. The GED turns from some stupid test into a ticket out of here. The academic coaching that you fruitlessly offered in the past turns into ‘Yes, mother, I would actually like to hear your advice. Yes, I would like your help with algebra. Yes, let’s look for SAT prep classes together.’”

The magic sauce is internal drive — and without it, Blake says, college isn’t much good anyway.

“Is she genuinely ready and eager for college? Will she commit to finishing and not drop out early? Both she and you are gambling. Everyone likes to think of their children as above average, but if Bryan Caplan’s statistics are to be believed, then there are more losers to be found in the college game than winners. Pushing an academically burnt-out and under-motivated 18-year-old into college is a poor bet on all accounts.”

So much of people’s resistance to Self-Directed Education stems from a fear of the unknown. Blake eliminates the unknown and in doing so calms our fears.

He also provides a thorough analysis of the statistics regarding SDE kids and college. Bias is always a problem in these kinds of studies, and Blake will be the first one to acknowledge it. He doesn’t seize on the favorable results while ignoring the unfavorable ones — rather, he’s a realist. “Looking at the evidence as a whole,” he concludes, “the radically alternative routes seem unlikely to alter a kid’s college prospects.”

Why Are You Still Sending Your Kids to School? might be my new go-to book to introduce the uninitiated to Self-Directed Education. Why? Because Blake acknowledges the reader’s conventional beliefs with respect and care, while still disagreeing with them. His approach is unlikely to turn people off at the get-go, unlike many writers who go straight into rant mode (not that there’s anything wrong with rant mode — it’s just not for everyone).

In this way it’s a lot like another of my favorite books, The Self-Driven Child by Stixrud and Johnson, which provides lots of concrete evidence for the benefits of self-direction without making any statements so radical as to turn off its conventionally-minded audience members.

Unlike Stixrud and Johnson, however, Blake is not afraid to tell the truth: that conventional school is not equipped for self-direction and therefore many, if not most, kids are better off without it.

A Tour of SDE Models

If you’re new to Self-Directed Education, and don’t know which model is right for you, Blake Boles is the best person to talk to. To my knowledge, he’s the only writer who has a good understanding of every model, from Sudbury to unschooling to Agile to Liberated Learners.

Further, he doesn’t seem to have an ideological preference for any of them (or if he does, he’s very good at hiding it!). If you pick up Why Are You Still Sending Your Kids to School, you’ll find the information you need on SDE models with minimal bias.

There’s more to Blake’s book than information on SDE. I love the cameos of some of my favorite thinkers, including Judith Rich Harris (The Nurture Assumption) and Johann Hari (Lost Connections), neither of whom wrote a word about self-directed education, but whose ideas apparently intersect with it in a profound way.

One of the big takeaways from the latter part of Blake’s book is that human connection is so much more important than our society gives it credit for. In the current epidemic of loneliness, anxiety, and depression, connection is not only a healing force but a path to both lifelong purpose and conventional success.

“Maybe your kid will find her connections through sports, band, robotics, or a performing arts group. Maybe the spark will come through a voyage with Outward Bound, or a family trip abroad, or a local internship. Maybe your kid will come alive through an eSports tournament or attending VidCon. Or maybe, through their new alternative school or homeschool community, they’ll make a handful of new friends—and that’s all they’ll need for a happy and healthy adolescence.”

Why Are You Still Sending Your Kids to School? is available now on Amazon and mainstream bookstores, but please do your local booksellers a favor and order it from them if you can. They could use the business right now. E-book and audio versions are coming soon.