The Educational Value of Video Games

No, I don’t mean educational video games, like the ones your local public school lets their students play in math class, in which players have to solve multiplication problems to help some frog get across the road or something. I mean the kinds of video games your kids are always begging you to buy for them. Games like Minecraft and Fortnite and Pokemon and Toca Life and whatever else the kids are playing these days. Yes, these are all educational games! 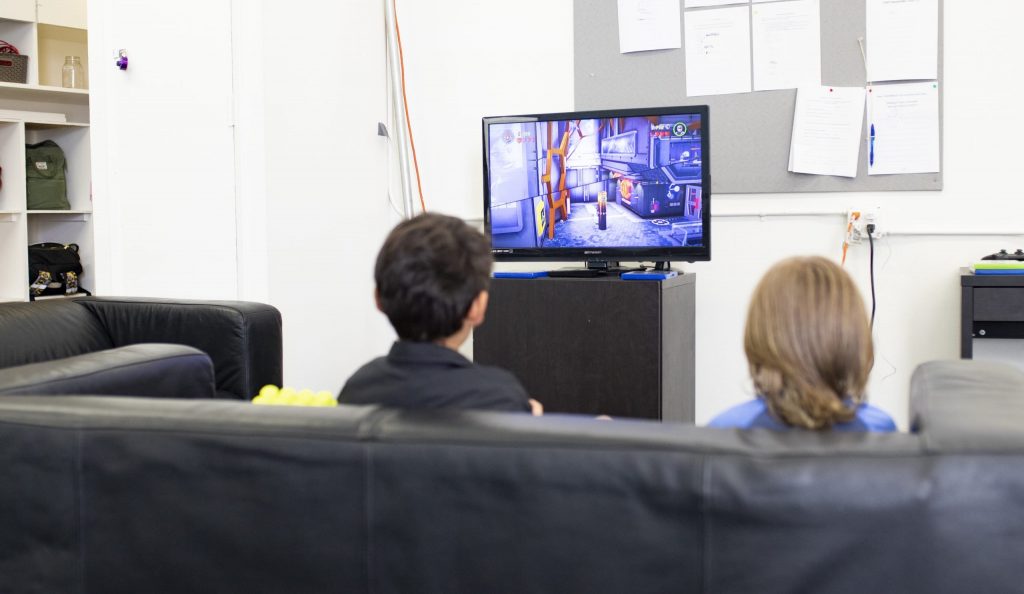 I’m going to illustrate this using a my own experience playing the video game Fire Emblem when I was a teenager. It’s a tactical game, like Chess, but much more sophisticated. Rather than controlling generic pieces like knights and bishops, you control realistic characters with deep backstories.

I’ve chosen not to use stories of students at The Open School because it’s really impossible to know what another person is learning unless they tell you. I played Fire Emblem a huge amount as a kid, so I learned a lot of lessons and skills from it over the years. So without further ado, here are seven things I learned playing this game.

Fire Emblem has a huge amount of text. The dialog is text; the gameplay instructions are text; the character fact sheets are text. There is no way to play the game without reading. A lot. Whether a player has only a rudimentary ability to sound out words, or a functional fluency, their reading proficiency will certainly improve while playing the game.

Like many strategy video games, Fire Emblem is made of numbers. Characters have stats, which are numbers that represent their abilities. For example, if your character has an attack stat of 23, and your enemy has a defense stat of 10, that means if you attack them, you will do 13 damage. If you want to know whether it’s a good idea to attack that enemy (or attack some other enemy, or run away), you have to first look up your character’s attack stat and your enemy’s defense stat and do some subtraction.

Now suppose you want to know how many times you need to strike the enemy before he dies. He has 52 hit points, so if you do 52 or more damage to him, you’ve killed him. How many hits will it take? One hit does 13 damage, so 2 hits does 26, 3 hits does 39, and 4 hits does 52. So the answer is 4 hits. You may not realize it, but you’ve just performed division (52 divided by 13 equals 4). And whether or not you realize you’ve learned how to do division, the skill will transfer over to other situations in your life where you need to divide.

Fire Emblem is no walk in the park. You can turn down the difficulty if you just want to enjoy the story, but you can also crank it up until it really tests you. As many kids do, I chose the latter. The thrill of the game for me was not the thrill of crushing weak enemies like ants, it was the thrill of being the underdog and winning anyway. This meant I had to come up with creative strategies and win with brains rather than brute force. I had to analyze enemy formations and identify their weak points. I had to turn my team into more than the sum of its parts.

Like many popular games today, Fire Emblem has something called permadeath, which means if your character falls in battle, they are dead for the rest of the story. You can get them back by starting the battle over, but since a battle can take up to 2 hours, that’s a lot of progress to throw away. You have to be very careful when making your strategic choices, because one little mistake can seriously cost you.

Not only did this teach me to pay attention to the details and be careful, it taught me how to manage my negative emotions. There were times when my favorite character was killed near the end of a difficult battle and I had to start over, and I wanted to put the game away and never play it again. Sometimes I would take a break for days or even weeks before the bitterness of loss had completely faded and I was ready to try again.

But I was always ready to try again. No adult needed to provide me with a reward for finishing the story. The sense of accomplishment was its own reward. Over time, I got better at accepting losses and moving forward without needing to take long breaks.

Because it was so important to me to be careful and not make mistakes, I eventually discovered while playing Fire Emblem that if I played for a very long stretch of time, or late at night, I was more likely to make a mistake and get killed, because I was tired or sleepy. (I would often think, “Why did I do that? That was obviously a stupid move! I thought I was smarter than that!” Well, yes, you were smarter, when you were more awake.) Playing Fire Emblem taught me the importance of taking breaks and getting enough sleep if I wanted to be at my cognitive best.

Unlike a game of Chess, which lasts 30 minutes or so, a game of Fire Emblem lasts around 50 hours. It’s not a single battle, but a war that consists of many, many battles. Every decision you make has ripples through the future. Investments you make early in the game pay off in the late game. For example, if you avoid buying little things and save up your money, you can afford bigger and better things later. And if you spend time training your plucky but inexperienced new recruit, rather than letting your seasoned knights do all the work, you’ll be rewarded later with one extra seasoned knight, which could turn the tide of battle. Playing Fire Emblem taught me to think ahead — way ahead — and how to evaluate the trade-offs between spending and investment.

Fire Emblem isn’t just about battles — it’s also about people, their relationships with each other, and their hopes and ambitions. It’s hard to estimate, but there’s probably a novel’s worth of text in every Fire Emblem game, delivered in the form of dialog between characters. Through experiencing these characters’ stories, I learned about many aspects of life: loyalty and forgiveness; the hard moral choices people have to make in times of war; bravery and sacrifice; the difference (or lack thereof) between friendship and family. The list goes on forever.

So there you have it. This is only a short list of things I learned while playing Fire Emblem; there are certainly a lot more things that remain unmentioned. And this is only one video game. Every game has its own lessons — just like every non-digital game children play, and really just like every activity that children engage in when they are doing it for fun and not because someone is making them.