Worldschooling at the Carlsbad Tide Pools 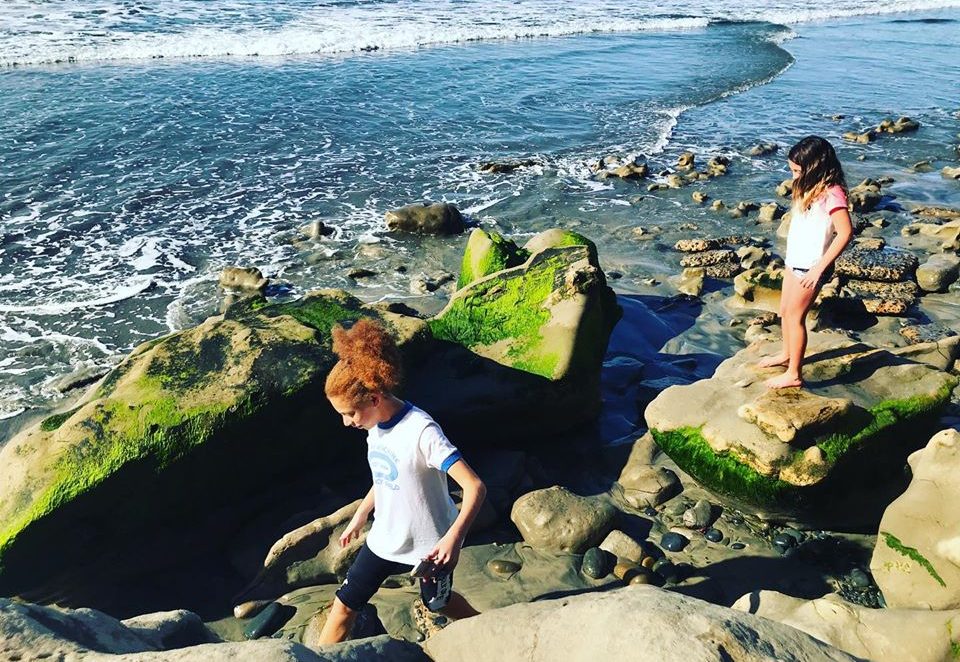 The fish was still flopping in the sand, right at the top edge of the tide line. It was about the size of my forearm, silver and glittering in the Southern Californian afternoon sun.

“We have to save it!” shouted one of the girls. There was a chorus of agreement, and we ran down to the water’s edge. I used my foot to gently nudge the fish back towards the waves until it was swept up and disappeared. Later, the two oldest kids named the fish Gerald, and we identified him as a small sea bass. The kids spent part of the ride back to school talking about Gerald’s life in the Pacific Ocean.

We went to the tide pools several times, but the tide was never quite low enough to reveal treasures like anemones and starfish. We found other mysteries: beached ocean life, shells, echoing oceanside caves, barnacles and sea vegetables. We climbed on boulders and each claimed our favorite as our own, like explorers in the Antarctic. Later that day, one of their dads told me, “I’m so glad this is what they get to do.”

Sometimes self-directed education is a struggle.

In self-directed education, kids always have periods of times where they get bored, and they have to figure out what to do when they are bored. They get to tap into their friends for new ideas, and over time they begin to recognize that bored feeling as a kind of restlessness, a longing for new ideas and new ways to move.

In self-directed education, kids have interpersonal conflicts, and they have to figure out how the person who they are negotiates conflicts with the people they love. They’re confronted with the idea that the same apologies don’t work for everyone, and that behaviors that signal friendship to one person can signal dislike for another. They begin to see the flow and versatility of human diversity, and how our experiences inform our actions. They learn to recognize the friendships that don’t work for them, and the friendships that make every day more exciting.

In self-directed education, kids break rules. They make rules. They say, this doesn’t make sense, and that bothers me. They say, why are we doing it this way, and not another way? They think about what that other way might be. They start to find solutions. They start to advocate for themselves and agitate for the changes they want to make real.

Sometimes, this tension is not comfortable. We live in a world of instant gratification — and this is not specific to younger generations. Parents are used to instant gratification too, but our instant gratification comes in the form of progress reports, a finished worksheet, a good evaluation. How many times have we been willing to wait for our children to find their way? How much of our time together do we spend telling them who to be, instead of asking who they are?

Sometimes, self-directed education is kids dancing in the sunlight of the afternoon low tide, jumping from boulder to boulder on strong legs more used to running than being tucked under a desk. Sometimes self-directed education is saying, I want to find all the new, still-closed pine cones with a pink blush at the tips of their spines. Sometimes it’s selling your drawings to other kids, and getting paid in acorn caps from a blue oak. Sometimes it’s checking on the glass gem corn every few days to see if any tassels of silk are fluttering out from the stalks yet. Sometimes it’s reading your favorite book for the third time, just because it reminds you how you want to grow. Sometimes, it’s the littlest one crawling into a little sandy spot and reaching her arm in for a shell no one else could get to. Sometimes, we remember that we have all the time in the world.