You can’t teach writing (and why would you want to?) Teaching doesn't work, and when done to unconsenting kids, it's wrong

Before I became a staff member at The Open School, I used to spend my Thursday afternoons volunteering as an after-school tutor for 1st through 8th graders. The place was technically a writing center, situated in suburban Seattle, and open, free of charge, to any kid in the city. Its mission was to help kids learn to write, which would presumably improve their school performance and their prospects for life success.

I walked past that writing center today (I’m visiting Seattle this summer), and spent a moment reminiscing fondly. I remembered the always-warm atmosphere and the kind, helpful teachers. I remembered the fun activities and writing prompts.

Then I remembered why I left, and why I can never work or volunteer at such a place ever again. In the final months of my volunteership, my faith in the basic premise of the writing center faded. The founders of that organization, and the dedicated people who staffed it every day, had to believe wholeheartedly in two things. And I no longer believed in either of those things.

Here are the two necessary beliefs:

And here is why I don’t believe those things anymore.

Belief #1: It is possible for a person to make another person better at writing

Writing is hard. I suspect that people who seek writing instruction are feeling overwhelmed with the difficulty of the task and are looking for a way to make it easier — maybe some tips or tricks that the pros use which have somehow been kept secret from us plebeians. But there is no shortcut, no quick fix. There is only lots and lots of work.

A belief in the power of teaching shifts the responsibility for growth off of the learner and onto the teacher. This can only result in slacking on the learner’s part, frustration on the teacher’s part, and a bit of magical thinking to maintain the illusion of success in spite of perfect failure.

Stephen King, in his book On Writing, offered this piece of advice:

“If you want to be a writer, you must do two things above all others: read a lot and write a lot.”

Perhaps On Writing would have been a fine book even if King had left it at that. By reading a lot, you develop a sense for what good writing looks like and what bad writing looks like — just as a child learns her native language by listening to people talk a lot and learns to detect good grammar and bad grammar. She can’t define good grammar, but she knows it when she hears it.

I suppose a writing teacher can provide prompts, but then again, so can a computer.

I’m reminded of this discouraging piece of wisdom from bestselling novelist Haruki Murakami:

“Being a novelist isn’t a job for everyone. Nobody ever recommended or even suggested that I be a novelist—in fact, some tried to stop me. I simply had the idea to be one, and that’s what I did.”

Belief #2: Writing is inherently and objectively interesting and valuable

I suspect that their parents want them to care about writing, or want them to get good at writing despite not caring about it.

I know that the staff feel, as I do, that writing is the bomb! We love to write and we love to share our love of writing with kids.

But further, the staff believe, as I no longer believe, that writing is inherently, objectively, and universally interesting and valuable. They believe that if a kid doesn’t like writing, it is our job as teachers to inspire a love of writing within them — to awaken that dormant fire that must exist deep down in every person. This process of inspiration can be arduous and uncomfortable, as depicted in this cartoon (which was shared on Facebook by one of those teachers during Teacher Appreciation Week): 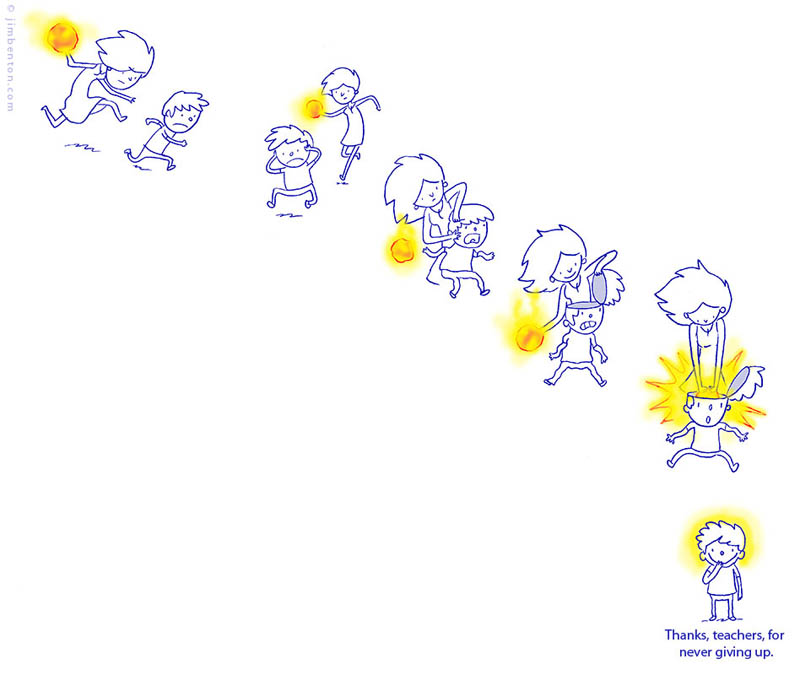 This cartoon is a feel-good fantasy for teachers. No kid has ever been inspired by being chased down and violated. Some kids discover a passion for writing and some don’t. Teachers like to seek validation by pointing to the kids who ultimately discovered a love of writing and saying, “That was me, I did that.” They rarely draw attention to the vastly more numerous kids who were not inspired.

We all have a tendency to feel as though our personal interests are shared by all of humanity. We want others to get excited about the things we get excited about. It’s a way of connecting with one another. We have to learn, by repeatedly butting up against the stubbornness of other people’s interests and values, that everyone is different.

And it’s good that everyone is different! Maybe I’m good at writing but someone else is good at speaking, and yet another person is good at presenting graphs and charts. There is no end to the variation. We compliment others’ weaknesses with our strengths.

I can never go back to that writing center because the very premise of the writing center is this: kids who don’t want to write should be manipulated into writing anyway. Manipulating people in that way has no appeal to me. I look at the above cartoon and imagine myself chasing down that poor kid and prying off his skull while he’s crying in pain and it makes me sick. I don’t want to have that kind of relationship with children.