There is nothing quite as intense, disordered, and interesting as four boys playing Minecraft on an Xbox in split-screen mode. Here is a microcosm within a microcosm of life, relationships, industry, and cutthroat market competition, on 16x fast-forward, fueled by adrenaline, in a medium of at least 33 percent excited screeching. 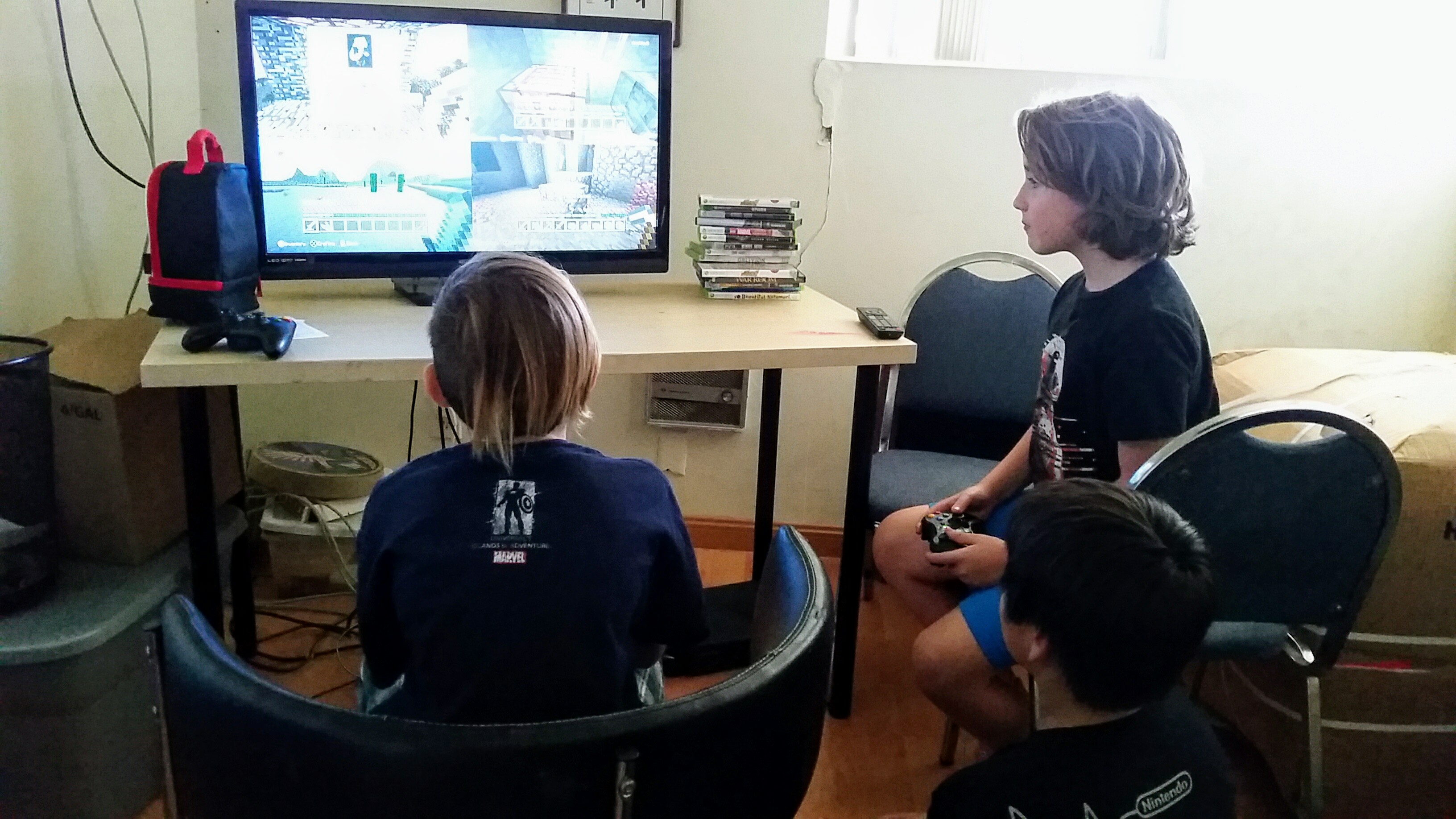 Josh, Odin, Loki, and Gerald were working together to build an underground house. They each had their own vision of the common space and were alternately begging, demanding, negotiating, and calmly reasoning with each other regarding the building plan. They had the usual Minecraft superhero power to place or destroy a 3’x3′ cube of cobblestone in less than a second, so any negotiations had to take place at a lightning pace. And as occasionally agreements were broken, they had to decide whether to settle disputes with fights, apologies, or reparations.

The house branched off into various personal spaces, sometimes rocketing away into natural tunnels with underground rivers or lava streams, where one might find an iron ore deposit and gloat about it for a moment before offering his 15 iron ingots for someone else’s golden apple, and after some haggling end up trading 30 iron ingots instead. Then 5 ingots are used to craft a helmet, 8 are used for a chestplate, and 7 are used for leggings.

John Holt said, “We learn to do something by doing it — there is no other way.” To many people it may not seem like Minecraft counts as “something,” but it most certainly is something, and kids most certainly are doing it. They are not studying economics, nor are they reading about architecture; they are participating in a real market economy and experimenting with real building plans. They are not being taught ethics or integrity, but they are learning first-hand how it feels to be treated unfairly and how business is more efficient when all parties adhere to their agreements.

They are not learning to read or do arithmetic; those are baby skills. They are using those skills to read instructions, make recipe measurements, and decide on prices, and they are building on the basic skills at the same time.

They are working on complicated projects that require intense focus while being bombarded by distractions and even existential threats. People are yelling at them, messing with their stuff, attacking them, offering them trades, and coaxing them into ore-rich mines. They expertly direct their attention where it is needed without losing their flow.

Odin preferred to be a moderator, which meant he could fly and materialize an infinite amount of any substance. The other boys required that he pay 3 diamonds as an entrance fee to their house. Those boys chose not to be moderators — self-handicapping in order to make the game more interesting and challenging.

At one point Loki went rogue and started attacking the others, who banded together to drive him off. He decided to make peace with them, though only so he could infiltrate them and perform a surprise attack, which got him killed.

Then, suddenly, the game was over and they found a big red rubber ball and were playing “ball tag.” Many of the same forces were at work in this game — chaos and learning, the only two guarantees at any moment at The Open School. Again, what looks at first glance like “just a bunch of kids running around” is a complex game of strategy, creativity, and negotiation.

This is especially true at our campus, which is a single long building with four routes to cut through from one side to the other, along with two huge wide-open spaces, and plenty of things to hide behind. A big challenge is figuring out how to use the terrain to your advantage, and there are an infinite number of ways to do this.

Another challenge is figuring out how to use the other players to your advantage. If the person who’s “it” is trying to hit you with the ball, you are safer in a large group where you are less likely to be targeted, and the others can provide look-out services. But your strategy may differ from theirs, and you may find yourself running off in another direction.

If you are “it” you can gain an advantage by convincing your opponents that you are running one direction but then actually run in the other direction, which is possible because players can often see each other through multiple doorways or hear each other from around obstacles. There are many ways to fake your opponents out, and they all depend on being able to predict their behavior better than they can predict your behavior.

I may as well mention in passing that ball tag is a game of physical feats, including fast running, swerving around corners, climbing through windows, accurate throwing, and timely dodging. There may be no finer way to learn physical literacy, stay in shape, and have fun doing it.

There is something at the core of traditional pedagogy, that learning happens when educators plan for it to happen — that all they need to do is build a curriculum and somehow that is enough, that the intent to educate is equivalent to an education. In reality it is the other way around. Education fails when it is planned, and the only true education is the unplanned education. That is why chaos and learning go hand in hand.

At The Open School there is no intent to educate, and so from a traditional perspective there must be no education. But if you look closely, you will see that the kids are learning all the time, and that they are building exactly the skills that will serve them in life and work.