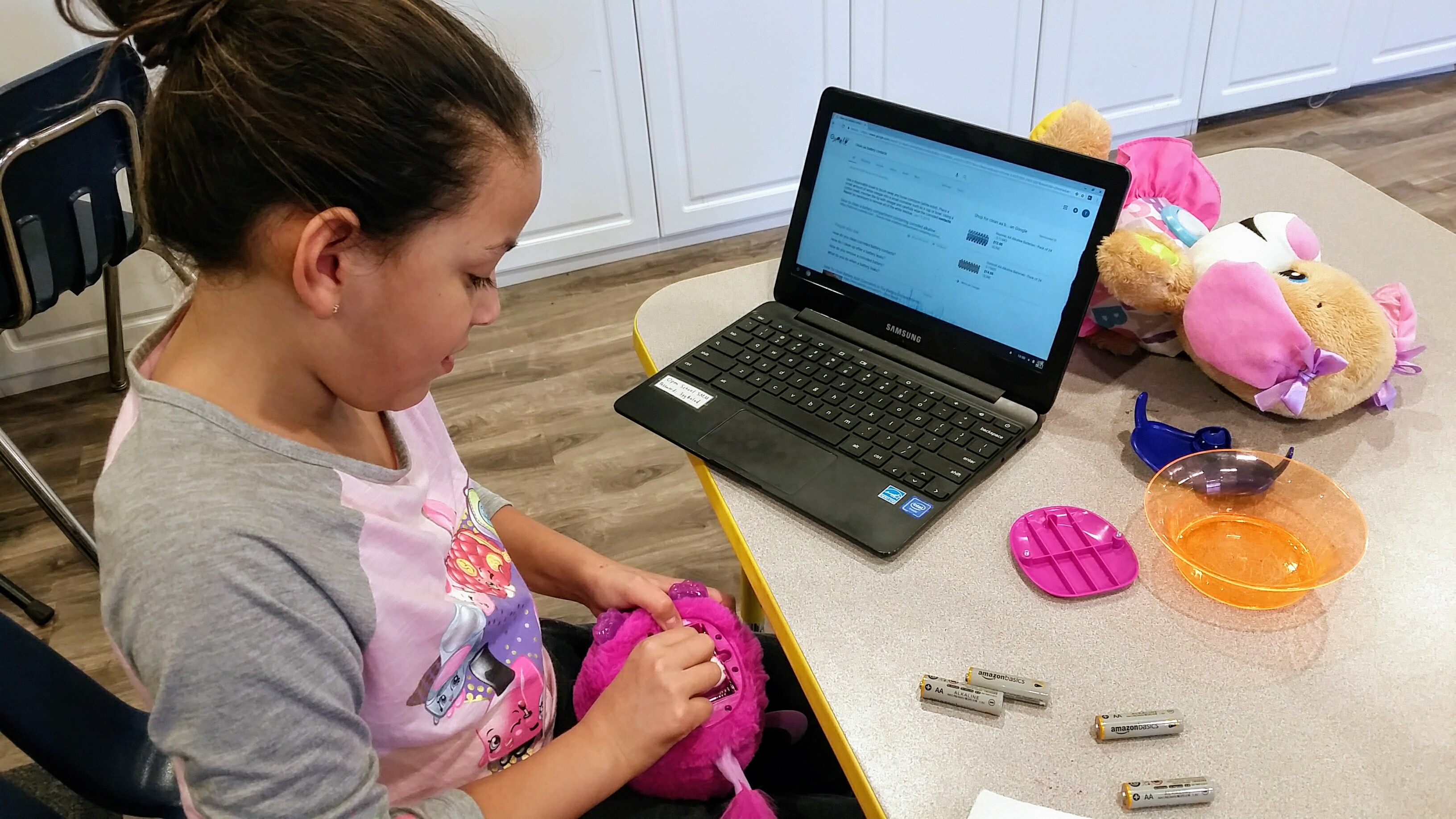 Lily follows online instructions to clean the battery contacts on her Furby, which have become corroded by months-old batteries.

What have you done this week at school?

We played a lot of zombie tag. It starts out with one zombie and everyone else is human. If a zombie tags someone and the healer doesn’t get to them in ten seconds, they’re infected and they become a zombie. So there are more and more zombies as the game goes on. It’s tricky because you have to think about where people are going to go. They might appear on one side of the building and when you start running away, they psych you out and go the other way and get you.

We went on a field trip to an archery range. I destroyed everybody at archery. The guy put up a balloon on the target, and I just pulled one arrow out, aimed, shot, and popped it. Every time you popped one he would put up a smaller one. I killed at least ten balloons. At first I thought you just pull back with full force, but it turns out you only use three fingers, and just pull back until your finger touches your mouth. I picked it up quickly.

Also this week I made a paper plane. I wanted to see if a bunch of folded up pieces of paper could fly. It did fly, but it exploded in midair. The tail fell apart because Marco threw it and it crashed into Cadence. I also watched a lot of cat videos. I like them because they’re funny and and they’re animals, and I like animals. 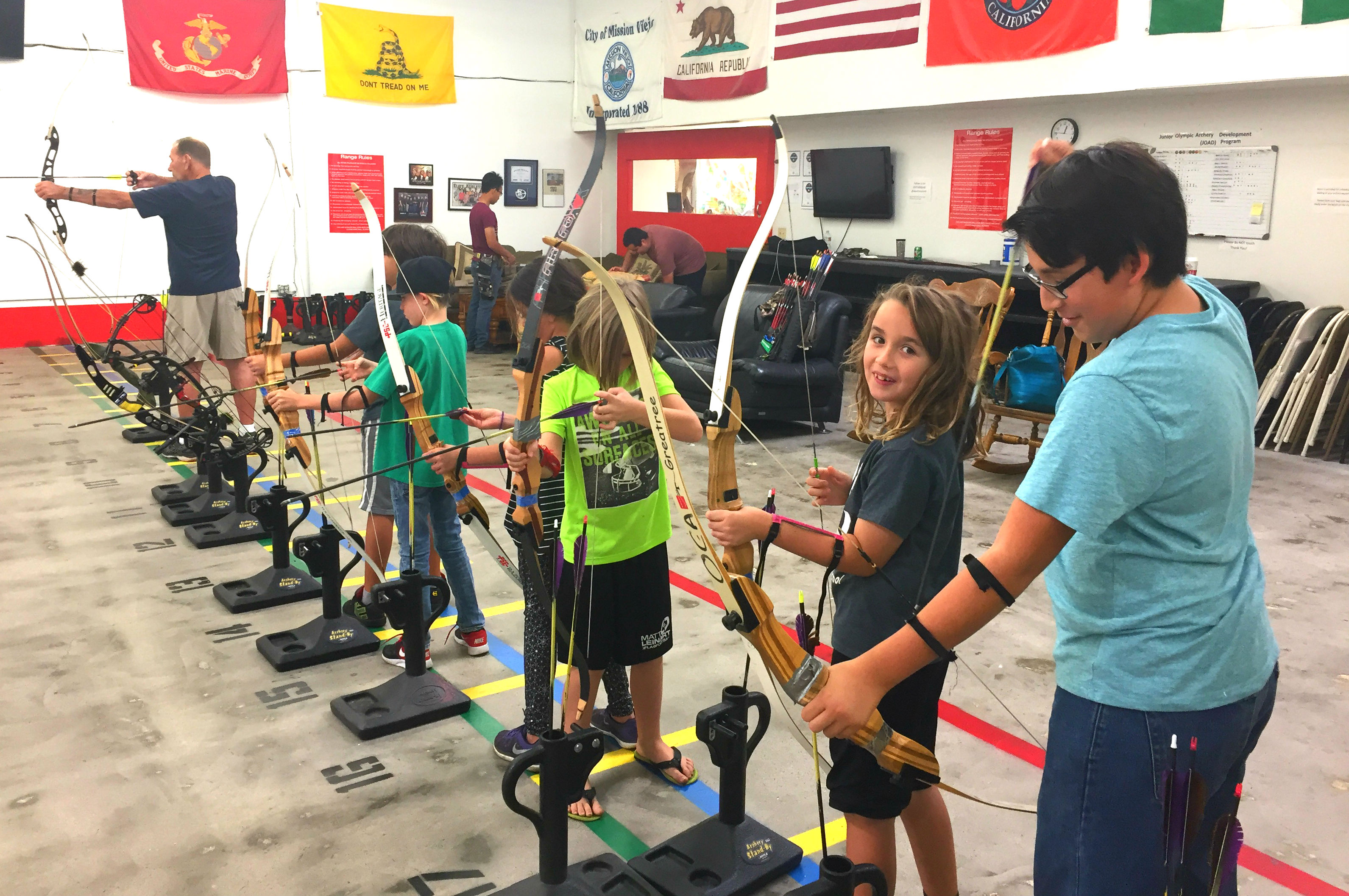 I did some painting. I thought we had canvases but we didn’t, so I painted on paper, but the paper soaked through. I asked Cadence if I could paint on her canvas, which was just shades of blue, but she said she wanted to fix it up. I offered her money for it, and she said sure. I painted a starry night.

I like painting because you get to do whatever you want, which is basically the whole point of the school. Painting is just fun — except the cleaning up part, nobody likes that. But I do it anyway.

One day I brought my Furby. He’s cute, annoying and fun, but only if you download the app. People say he can’t sing, but he can definitely sing. I named him Cotton Candy. I don’t know why. It sounded like an appropriate name for a really furry fluffy creature.

I played the piano. I ate my lunch. One day we played hide-and-seek with the Furby. You either seek with the Furby or you hide with the Furby. Or you can hide the Furby somewhere and you hide separately. It’s fun because Furby is soft and has cute eyes and it keeps you company while you’re hiding. It’s also nice to have while seeking because it might help you spot things, because it’s electric and can see things that you might not be able to see.

Today I played kick-the-can with Jake, my brother, Lily, and Cadence. One person guards the can while everyone else is trying to kick it. If they come near the can you run after them and tag them. It’s challenging because some people are much faster than me. While we were trying to kick the can, I would tell people, two of you go that way and two of you go the other way, because the person guarding the can can’t go for both of you.

At one point some people were hiding near the can and would jump out and kick it the instant the game started, which was kind of unfair. But everyone told them to stop, so they stopped.