When kids are responsible for their own discipline

If you ever got in trouble when you were a kid, you probably remember those trips to the principal’s office — the adults hovering over you, the questioning (“Do you understand why it was wrong?”), the explaining (“That’s not how we treat our friends”), the advice (“How would you feel if that happened to you?”).

They were probably trying to get you to understand something, to have some moral revelation, but all the while you were just anxious to get out and wondering, “What do I have to say to make them happy?” And when you said, “I understand, I won’t do it again,” the adults smiled and let you go, and you relaxed, having dodged a bullet — whether or not you really understood what they were talking about. 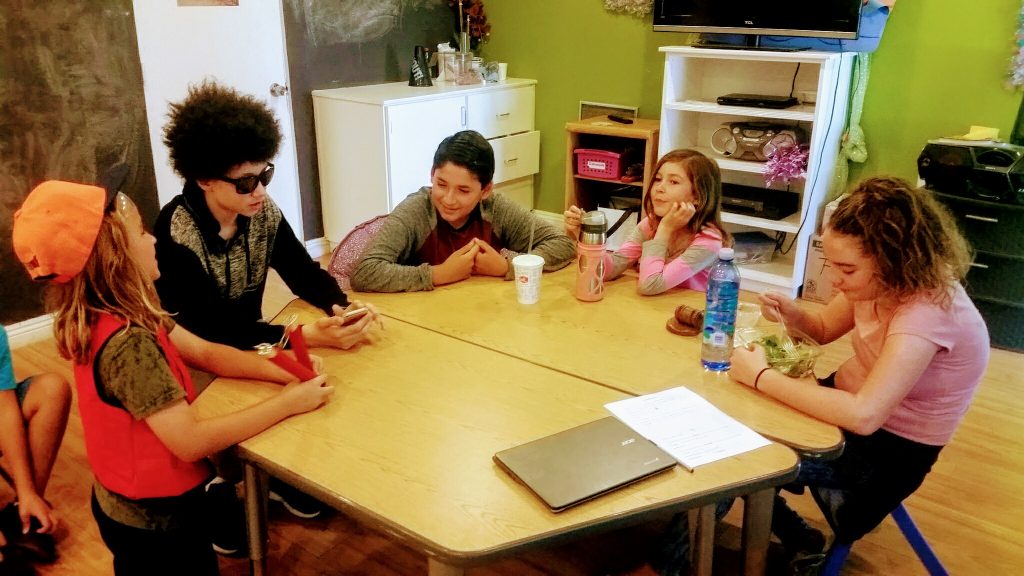 The Open School, now at the start of its third year, is still somewhat of an experiment in progress. When we started our school, we didn’t know exactly what discipline would look like, but we knew we didn’t want it to look like the old principal’s office, with adults lecturing and kids saying whatever they needed to to get out of there.

This week we had a handful of write-ups, and I can already see how the system has matured since we put it into practice last year.

What’s a write-up, you ask? That’s the first step.

Something happened. We don’t yet know what. Michael gets a write-up sheet off the desk and fills out the form — his name, what happened, where it happened, when it happened. Apparently, Michael was about to get a drink of water from the water fountain, when Avery dashed in front of him and took a drink first.

Michael was bothered by this. But he didn’t shove Avery out of the way; he didn’t plot revenge; he didn’t run to an adult and say “Please do something about this.” Instead he fills out a form.

As a member of Mediation Committee, I check the file. I see that Michael has written Avery up and that he is requesting Mediation. Essentially, I’ve been hired by Michael and Avery to serve as a Mediator to help them resolve their dispute. If either of them refuses the service, I don’t provide the service. But in this case, they both want it.

At 11:00 AM, the three of us meet, and I ask them to each share their observations.

The first step is for everyone to share their observations without judgment. Michael explains that he was about to get a drink of water from the water fountain when Avery quickly took a drink before him. Avery agrees that that’s what happened.

I ask Michael how this made him feel. He says, “I feel like it was wrong for Avery to do that.” I remind Michael that this is a judgment, and that he should focus instead on the sensations he felt — for example, “thirsty”. Michael agrees that he felt thirsty, and also annoyed and impatient. I write the words “thirsty”, “annoyed”, and “impatient” on a white board under the header “Michael’s Feelings”.

I ask Avery the same question, and he decides that he was also thirsty and impatient. I write “thirsty” and “impatient” under the header “Avery’s Feelings”. It’s important for us to recognize that Avery has feelings too, even though he was the aggressor.

Next I ask Michael what his unmet needs were in this situation. He doesn’t really understand the question and says, “I needed him to not cut in front of me.” I remind him that this is a judgment of Avery, and that he should instead focus on the needs within himself — for example, a need for fairness.

The final step is resolutions. At this point, Michael and Avery have realized that they were both thirsty and feeling impatient to get a drink of water and that they both value fairness. I ask Michael what he wants from Avery as a resolution. Michael turns to Avery and asks calmly, “Will you wait your turn next time?” and Avery says, “Sure.”

Michael decides that he’s happy with this resolution, so Mediation is finished.

I think this is a step in the right direction away from adults lecturing and judging kids in the principal’s office. It’s still very adult-directed, with a staff Mediator carefully guiding the entire conversation. But the kids are learning, and eventually we will have student Mediators, and we will have students who are fluent enough in the language of Nonviolent Communication that they will be able to talk to each other directly, with a Mediator only to guide them back on track if they get caught up arguing.

Ultimately, we want students to be able to take responsibility for the maintenance of their own community.

Another day, another write-up. This time Danny has written up Nils, but Danny doesn’t want Mediation. This means that the school will handle the incident via Civics Board.

Civics Board is a committee which investigates incidents and determines whether rules were broken. Every staff and student takes turns serving on Civics Board, like a jury.

Today, Civics Board consists of the Chair (11-year-old DJ Cat), me, and four other students. The students are not impatient to get back to their play; they’re not asking How many write-ups are there or complaining Why did I have to get selected or wondering Maybe I can get so-and-so to take my place if I give her a piece of candy. They chose to be here. They mean business.

DJ Cat bangs the gavel and calls the meeting to order. She reads the write-up. According to the form, it was Danny’s turn to play on the Xbox, but Nils refused to get off.

DJ Cat asks Nils to tell his side of the story. Nils goes into a long explanation and starts to ramble, but I manage to jot down some kind of summary. So the story goes, Danny asked Nils to get off three or four times, but Nils kept playing for several minutes before finally stopping, about halfway through Danny’s reserved time.

The Civics Board team discusses it for a moment and decides to call Danny in to confirm the story. I read my summary to Danny, and he says, “Yep, that’s what happened.”

I pull up the law book on my laptop and suggest that Nils has violated the terms of the Xbox set forth by the Electronics Committee. DJ Cat calls a vote, and the Civics Board team agrees that Nils has indeed broken this rule. DJ Cat asks Nils, “How do you plead?” and Nils says, “Guilty.”

I move that Nils be given a warning. Aria disagrees; she thinks Nils should be restricted from the Xbox for one day. The other members of Civics Board agree with Aria. I argue that he hasn’t broken this rule before and that he probably won’t do it again after this ordeal. Dakota retorts that everyone knows you’re supposed to get off the Xbox when someone has reserved it.

The team seems satisfied with this, so DJ Cat calls a vote. “All in favor of a one-day restriction from the Xbox?” Everyone raises their hand except me. “All opposed?” I raise my hand alone. DJ Cat bangs the gavel. “Motion passes.”

I enter the sentence into the computer and solicit a signature from Nils, making sure he understands his sentence. Then Civics Board adjourns.

While I wished that Nils had gotten off with a warning, I really couldn’t have been happier with the outcome of this meeting. Last year, it was extremely rare for Civics Board to go against the suggestions of the staff. Raised in a culture in which the adult is always right and must never be questioned, it’s hard for kids to trust their own judgment. This year I can see that they’re beginning to have confidence in themselves.

As with Mediation, the goal of Civics Board is for the students to take responsibility for the maintenance of their own community. We want students to think deeply about ethics and the logistics of laws. It’s in this way that they’ll become ethically responsibly community members.

Someday I hope our students will be mature enough to take the entire process of discipline in their school into their own hands. They will need adults not to tell them what to do, but to debate, to share wisdom, and to have critical discussions, and through this process the students will grow more independent, more responsible, and more compassionate.