Free play is the best P.E. 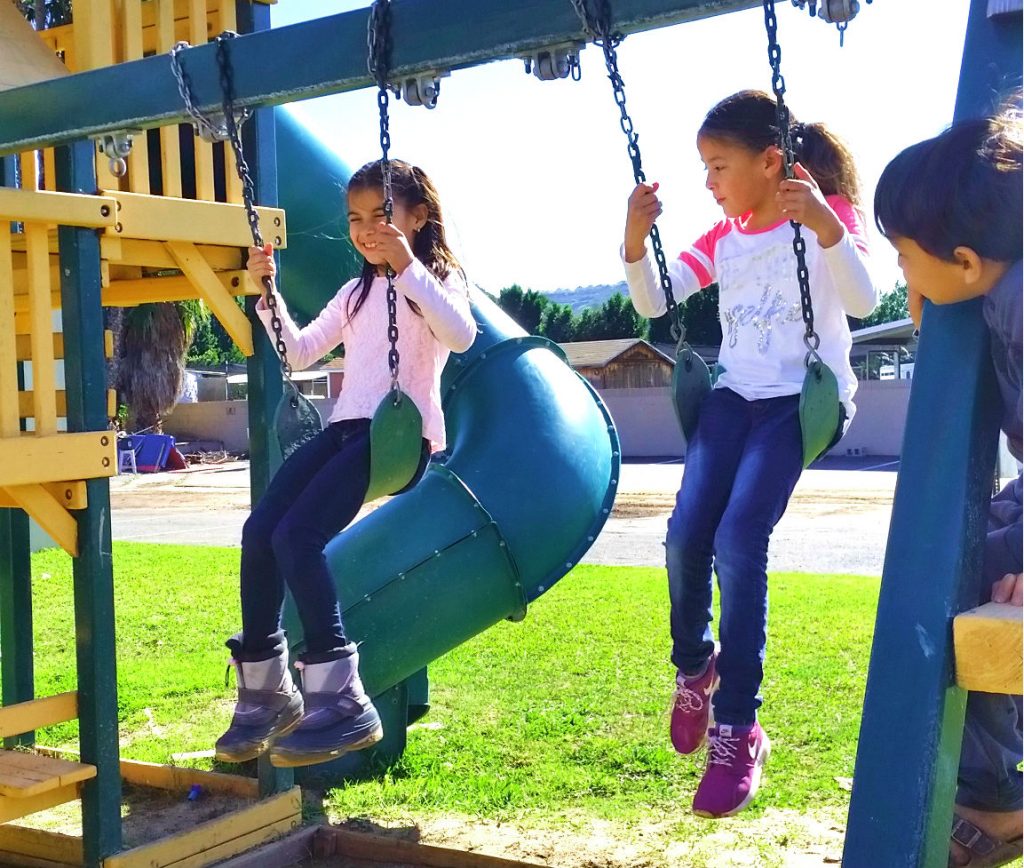 When was the last time you got on the swing next to your child and tried to keep up with him or her?

Now that we’re back at school for the fall, I got my first chance in a while to do this, and boy it’s not easy! Behind the innocent-looking pendulum motion of the swing lies a lot of pushing and pulling — a real upper-body workout. I couldn’t stay on for long, but the kids kept going and going and going.

With other playground activities, it’s a similar story. Climbing up the slide, swinging upside-down on the trapeze — even digging in the sand requires a lot more strength than you think. And don’t even get me started on freeze tag.

Schools want kids to get in shape, and so they’re very conscientious when designing programs like Physical Education and after-school sports. But not only are these programs unnecessary for kids who are given plenty of time for free play, adult-designed programs rarely cover the full spectrum of motion that kids’ bodies are capable of.

If you’ve ever seen a killer whale at SeaWorld (or seen the movie Free Willy), you may have wondered why the orca’s dorsal fin is flopped over. While SeaWorld has offered the explanation that the “folded fin syndrome” is a genetic disorder, the fact is that 100% of male orcas in captivity have folded fins, compared with less than 1% of wild orcas. 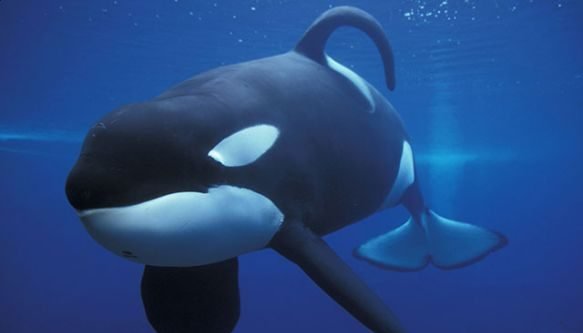 A male killer whale’s dorsal fin can grow up to 6 feet tall, and is used to stabilize the animal while swimming. Clearly something is wrong with this picture. Why does this happen to orcas in captivity?

In open water an orca swims far and fast, and the water pressure keeps the dorsal fin upright. In captivity, the orca doesn’t have much room to swim and will swim in a repetitive circular pattern. Also, orcas in captivity spend more time at the surface, where gravity has a stronger pull on the fin.

Seeing this majestic creature so obviously deformed should be a big red flag for us. What other disorders might captivity be causing, which are not so easy to spot?

The folded fin is just the tip of the iceberg. We now know that orcas in captivity suffer from a wide variety of illnesses, including broken teeth, kidney disease, and various infections, often dying at young ages.

Diseases of captivity in humans

Humans in modern, industrialized nations are also animals in captivity. We spend almost all of our waking hours sitting, at desks or in cars or on couches. Even the committed exercisers among us spend only around three hundred minutes a week in motion, compared with our hunter-gatherer ancestors who used their bodies eight hours a day (about three thousand minutes a week).

Obesity is now an American epidemic. In 2015, 7.4% of Americans were diagnosed with diabetes, compared with less than 1% in 1958. But again, this is only the tip of the iceberg. Depression, near-sightedness, and knee osteoarthritis, to name a few, have all surged in prevalence in modern times. These are results of the many ways our lifestyles have changed in the past 100 years, 1,000 years, and 10,000 years.

Exercise does not equal movement

Health professionals, along with most Americans, have become alerted to our movement deficit and now prescribe regular exercise as a cure.

While exercise undoubtedly has health benefits, we may be missing half the picture. In the book Move Your DNA: Restore Your Health Through Natural Movement, biomechanist Katy Bowman explains that our problem is not so much lack of movement as it is too much repetitive movement:

Movement of any type improves the circulation only through the muscles that are being used for that specific movement. Even if you’re a great exerciser — maybe you bike or jog religiously — only the muscles you’ve used for that specific exercise garner any benefits. Over time, heavy use of your body in one particular pattern makes strong tissues next to weaker ones, which creates an environment where an injury can slowly develop.

This means that while a daily jog may improve the strength of your heart, legs, and feet, all the muscles you aren’t using (almost all of them) are still not getting the movement nutrition they need, which can lead to weakness and injury down the road. With over 600 muscles in the human body, even diverse exercises like yoga and dance fail to exert even a small fraction of the body.

Trying to get in shape by running a mile a day is like trying to improve the health of your orca by having it swim in circles in its pen. You will be somewhat healthier, but you will still have a flopped-over fin.

Children already have the answer

According to Bowman, we’ve been thinking about health entirely backwards. We move to become healthy; meanwhile, hunter-gatherers and children move to accomplish real goals. Hunter-gatherers use their muscles to build dwellings and chase prey, and children use their muscles to build forts and chase each other in play. The difference is in the motivation. 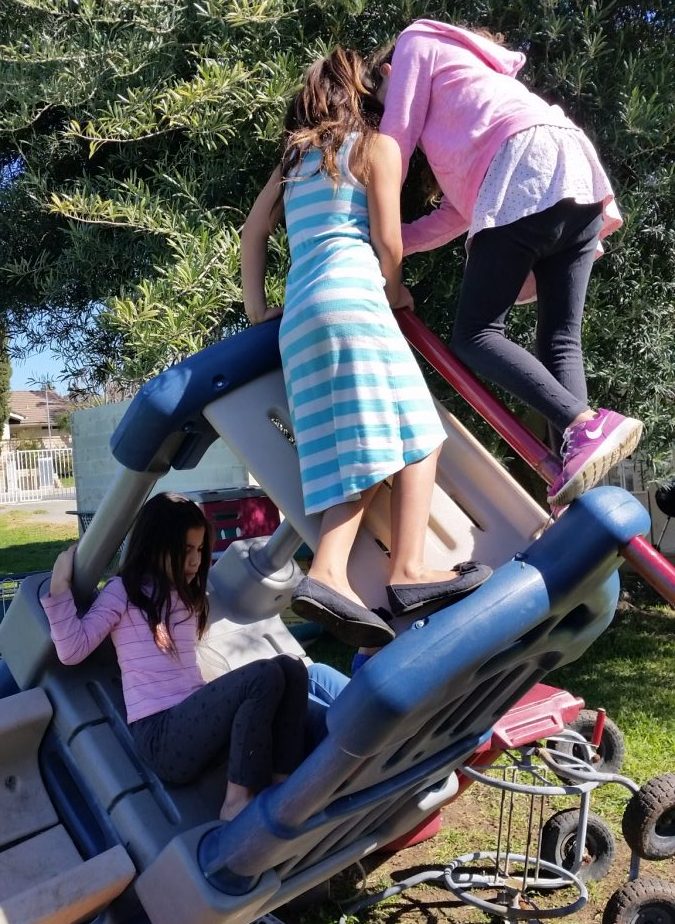 When we exercise for health, or put kids in programs for physical activity (like soccer and karate) we design programs that are narrow and repetitive and only exert a tiny fraction of the body’s muscles. On the other hand, when children engage in free play, they naturally use the full range of motion their bodies are capable of.

Here are just a few activities that children do on playgrounds which exert their bodies:

The activity of swinging on an overhead apparatus, called brachiation, provides health benefits including developing hand-eye coordination, building arm strength, developing distance perception, and developing flexibility in the shoulders, arms, and back.

Children can climb on ladders, slides, jungle gyms, and other structures. Climbing helps children with developing their balance and coordination, building arm, back, and leg strength, and increasing agility.

Besides their use as a climbing structure, slides cause children to engage their cores and develop flexibility in their hips and legs.

Myopia (near-sightedness) is epidemic in industrialized societies and is nearly absent in hunter-gatherer populations. Myopia develops when we focus on close-up objects all day long. Obviously books and screens are a big part of the problem. However, in order to avoid injuring our eyes we need to spend time outdoors, looking at objects that are very far away. We can protect children’s vision by giving them plenty of time each day to play outside. 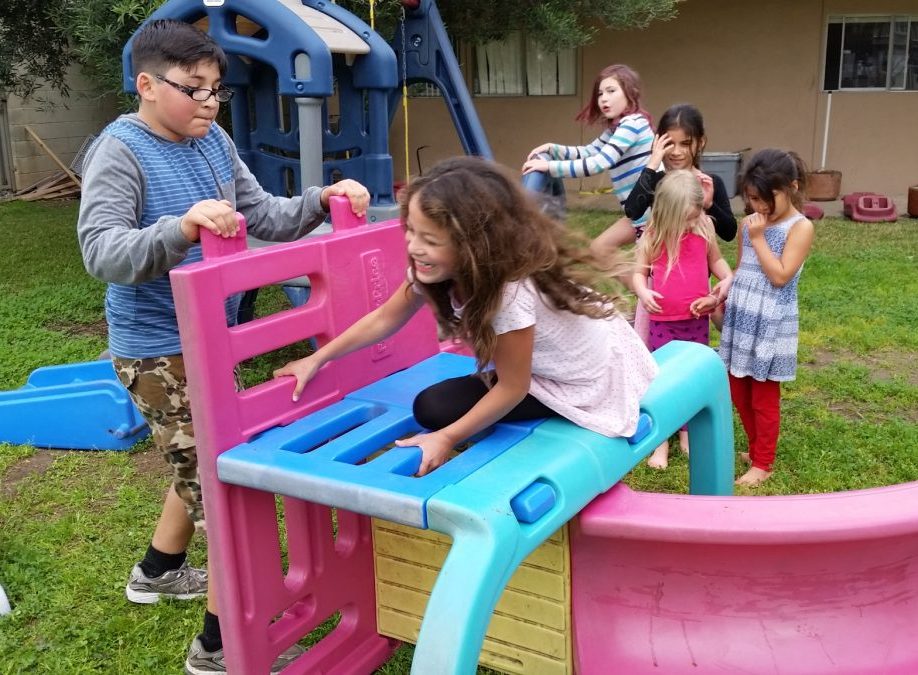 Anyone who’s spent time around free children knows that they don’t need a playground to reap these benefits. They will find structures that meet their needs whether they’re in a field or a house or a trailer park. They will climb trees, play tag, dance to music, hide under desks, shoot Nerf darts, and pick pillow fights.

Though we are living in the twenty-first century, we still have hunter-gatherer bodies. When children are allowed to listen to their bodies and play in the ways they find fun, they will naturally develop the strength and coordination they need for good health.

Though we educators and parents may be well-intentioned in our efforts to get our kids in shape, we will never be able to account for the huge complexity of the human body when we design fitness programs. The best fitness program for children is the one in which they are allowed free, unstructured, self-directed outdoor play.