Kids need community — and not the kind you’re thinking of In the age of disconnection, addiction, and anxiety, here's how to ensure your kids are happy, healthy, and successful 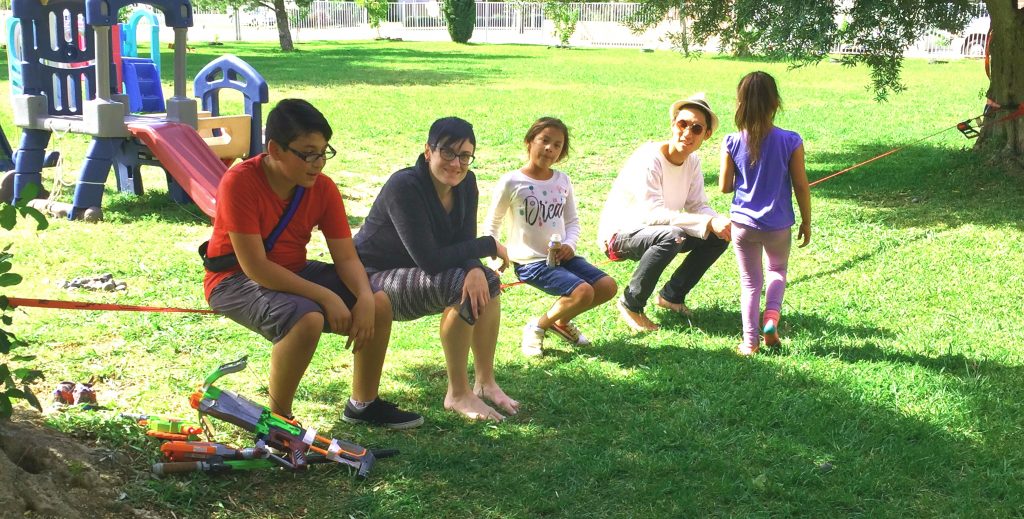 It’s 2017, and the debate about children and screen time rages on. Most people seem to agree that kids’ screen time needs to be limited, because they’re unable to resist the urge to be plugged in all the time.

Indeed, today, many adults are unable to resist the urge to be plugged in all the time. We live in a “hyper-connected world” in which we are constantly bombarded with information, pestered with notifications, and begged to keep scrolling.

And we usually give in. As Paul Kingsnorth notes in his article “The End of Solitude“:

“Nearly half of all Americans, Harris tells us, now sleep with their smartphones on their bedside table, and 80 per cent are on their phone within 15 minutes of waking up. Three-quarters of adults use social networking sites regularly.”

By all appearances, social networking is a poison which is taking over our minds and preventing us from living healthy, satisfying lives — or, as Paul Kingsnorth would say, lives with a healthy dose of solitude.

But we begin to see a different picture when we consider what life looked like during almost all of human history — the 100,000 or so years during which we lived in hunter-gatherer bands.

Hunter-gatherers were nomadic, living in extended-family bands which consisted of 25-50 members. They lived in camps together, foraged together, built homes together, played together, and slept together. They were always surrounded by close friends and family — to be isolated for very long in those hostile environments was reason to be afraid. To this day we experience anxiety when isolated.

The rest of the time we are alone, with only our smartphones for company.

From this perspective, it looks like our devices are not a poison, but an antidote. We are, and have been for many generations, a desperately isolated people.

We sleep with our smartphones beside our beds because our ancestors slept surrounded by all their loved ones. Click To Tweet

Unfortunately, social networking technology is a poor substitute for actual human connection. That is why, despite our constant connection, we are still so lonely and anxiety-ridden.

The suicide rate among 10- to 14-year-olds doubled between 2007 and 2014. In 2014 alone, 425 middle schoolers in America took their own lives. Rates of depression and anxiety among teenagers have increased by 70 percent in the past 25 years.

As a troubling illustration of this fact, most federally mandated tests include official guidelines specifically outlining how to deal with kids vomiting on their test booklets.

What’s alarming is not that kids are vomiting on their test booklets at a high enough rate to warrant these instructions. What’s alarming is our reaction to it. Instead of saying, “Oops, I guess these tests aren’t such a great thing after all,” we say, “Clean it up quickly, we’re losing valuable testing time.”

Seizing on these spikes in depression and anxiety among young people, journalists have scrambled to blame everything from testing to bullying to smartphones. I’m going to argue that the problem is something far more fundamental — it’s about the priorities we have as a society.

The opposite of addiction

Hari challenges the notion that drug addiction is caused by chemical hooks in the brain. He notes an experiment from the early 20th century in which a rat is placed in a cage with two bottles: one filled with pure water and the other with heroin-laced water. In nearly 100% of cases, the rat drinks the heroin water until it dies.

Then in the 70’s, a professor of psychology in Vancouver modified the experiment. Instead of placing the rat in a cage alone with nothing but water and heroin, he made the cage into a rat paradise, with plenty of cheese, toys, and friends. In this case, the rats rarely drink the heroin water, and none of them overdose.

Humans, like rats, need to feel secure, and when they can’t meet that need using healthy connection, they will use whatever means is available, whether it’s drugs, food, gambling, or technology.

“[There’s a study which] looked at the number of close friends the average American believes they can call on in a crisis. That number has been declining steadily since the 1950s.

The amount of floor space an individual has in their home has been steadily increasing, and I think that’s like a metaphor for the choice we’ve made as a culture. We’ve traded floorspace for friends, we’ve traded stuff for connections, and the result is we are one of the loneliest societies there has ever been.”

It takes a village

“It takes a village to raise a child.” This statement may be true, but it’s not very helpful. What kind of village do we mean? Is a “village” the same thing as a “community”? Does a school count as a village? Does a town count? What about a church, a parents’ group, or an extended family?

Let’s look at what “community” meant to hunter-gatherers. Their communities were groups of people who were born together and died together. They all knew each other intimately. They shared everything, without expecting anything in return. When someone got sick, there was no doubt they would be well taken care of for as long as they needed. When someone had a baby, everyone helped raise it; the women even shared breastfeeding duties.

It’s this hyper-connectedness which allowed our species to spread around the world and survive the harshest conditions, even ice ages which drove most large mammals to extinction. It’s no wonder that we feel a sense of profound security and peace when we are surrounded by loved ones.

I call this kind of community a “true community.” Virtually all of our modern communities fail to qualify as true communities. Our friend groups and networks are transient — members bail whenever it no longer suits them. They are generous with each other only when they expect some future return on their investment.

In these communities, people will not risk their lives for each other. They will not care for each other when sick. They will not raise each other’s children. Instead, we outsource these tasks to strangers. We rely on police to protect us, nurses to care for us when sick, and nannies to raise our children. All these relationships are ephemeral and depend on politics and economics instead of trust. They cannot provide us with a sense of true security.

We rely on police to protect us, nurses to care for us when sick, and nannies to raise our children. All these relationships are ephemeral and depend on politics and economics instead of trust. They cannot provide us with a sense of true security.

Nuclear families also fail to qualify as true communities. They are too small. Most modern families are made up of two parents and one to three children. Even with two parents, families are unable to provide their children with all the support they need.

My first exposure to a true community was in college, when I was a member of a fraternity for engineers called Triangle Fraternity, which had between 20 and 30 members.

When most people think of fraternities, they think of drunken house parties, hazing, and networking. But my experience with Triangle was something much simpler. We were a group of “brothers”.

Triangle was different from most social groups in that it exhibited authentic stability. With very rare exceptions, members stayed in the organization from the time they joined until they graduated from the university. During that time, they lived in the same house, hung out together, met at regular meetings with near-perfect attendance, and worked toward the common cause of keeping the fraternity alive.

Members of Triangle truly regarded each other as brothers. Once during my time there, a fifty-year-old alumnus, whom none of us had ever met, came into town. Because he was our brother, we let him stay in the house and took care of him. We soon realized that he was an intolerable racist and homophobe, yet we continued to let him stay for several months until he decided to move on.

True communities are rare, but they’re not confined to universities. There is a certain kind of school for children which exhibits the same properties. These schools look more like real life than a standard school with classes, bells, and desks.

Students in these schools “live” together with people of all ages, free to go where they want and engage with whomever they choose. With some exceptions, they stay with the same group of children and adults for their entire childhoods.

These schools are called Sudbury schools. As a staff member at The Open School, which currently has 15 students and 4 staff, I have noticed the same kind of trust, love, and security that I felt when I was in Triangle. The Open School is a true community. We are all here for each other, through thick and thin.

At a Sudbury school, students are free to use their time as they please. In light of this article, it should come as no surprise that they choose to spend a huge amount of time playing with each other, talking, and building relationships. Neither the staff nor the school structures will ever get in the way of this all-important work.

In this community, there is a sense that we all truly want what’s best for each other, rather than what looks good on our evaluations or what yields the highest test scores. And with that comes a profound respect — the kind of respect that allows us to leave important decisions in the hands of others, even if those others are young children and the decision is how to become educated.

Kids need true community. It is not optional. We can’t afford to shun it in favor of academic studies or any other kind of learning. When children don’t feel secure, their learning is impaired.

We also can’t afford to go on living in isolation. Will our children be the ones who feel the need to be constantly plugged in because the digital world is the only place where they feel connected?

Will they be the ones who use drugs to ease their pangs of loneliness, or contemplate suicide because they feel rejected from their society?

Will they be the ones who forgo friendships for material wealth, and then spend their lives trying to figure out, to no avail, why their wealth never makes them feel any better?

Our culture may be desperately disconnected, but we have a chance to break the cycle. We can teach our children that love is real and that profound security is possible. Then, perhaps when they go out into the world, they will see that it is broken and they will be inspired to fix it.

Learn more about The Open School…