Life after graduation: a free-schooler’s perspective

People often wonder how graduates from this kind of school fare in life afterwards. I decided to find out, so I interviewed a few of my old friends: Robin, Sam, and Cameron. Here’s what they said. 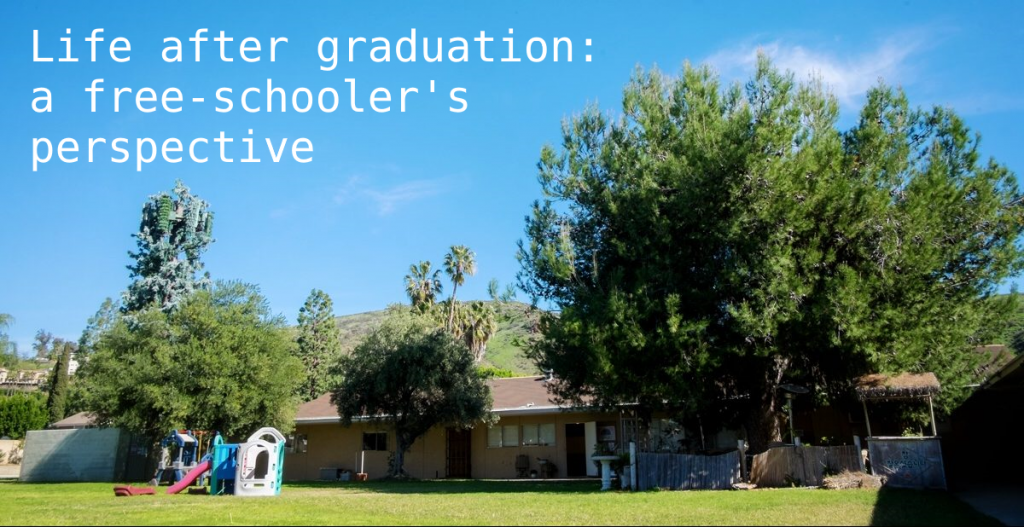 Tay: You attended Sudbury Valley School for three years. What led you to that type of school?

Robin: Traditional schooling didn’t agree with me. I was a “problem student” from grade one, and wasn’t motivated to participate in class at all.

Tay: Sudbury Valley worked out for you, though?

Robin: It did! I really enjoyed my time there and I learned a lot.

Tay: Why do you think it was so much more effective for you than traditional schooling?

Robin: I think traditional schools often have oppressive environments. They focus on negative reinforcement and discipline, which caused me to sort of shut down mentally. It made me feel like I was a bad kid.

Tay: Did you ever picture yourself running a business when you were a teenager?

Robin: I knew I wanted to work for myself, but it took me some time to figure out exactly what that meant for me.

My first job after Sudbury Valley School was at Peet’s Coffee and Tea. It was a lot of fun. I felt like I wanted to stay in the coffee industry forever. But as I learned more about coffee, I came to the conclusion that Peet’s was kind of subpar. I decided I could do a better job of it myself — so I opened my own shop!

As I learned more about coffee, I came to the conclusion that Peet’s was kind of subpar. I decided I could do a better job of it myself — so I opened my own shop!

Tay: How is business going?

Tay: What did you most want to improve about Peet’s?

Robin: I wanted to have better equipment to treat the coffee with more care. Our recipes are much more precise, and we make everything in house by hand. The coffee itself comes from a company that’s focused on direct trade and collaborating with the coffee farmers.

Our drinks are also smaller and more coffee-focused. And our specials menu features drinks invented by the staff. We really encourage creativity and trying new things.

Tay: Do you feel like you brought anything in particular from your school experience into the workplace you created?

Robin: Definitely. My school experience taught me that everyone’s opinion has value, and all of our staff are valuable. Our decision-making process is very collaborative and democratic.

Tay: What would you say to people involved in Sudbury model schooling, who might be worried about whether they’re choosing the right type of education?

Robin: The skills I picked up at Sudbury Valley School helped me learn how to be a functional, self-sustaining person in a community. I learned how to make meaningful connections, how to stand up for myself and what I believe in, and how to be self-motivated and get things done. And I learned how to never, ever be bored!

Tay: How long did you attend Sudbury Valley School?

Tay: Do you think there’s an advantage to starting at this type of school when you’re young?

Sam: Generally yes. That doesn’t mean people who start later in life can’t succeed, but from what I’ve seen, more people succeed, and become more involved in running the school, if they start younger. The more connected they become to the community, the more the community fosters their growth.

Tay: Did you ever leave Sudbury Valley School for a while to try another school, as some people do?

Sam: No. I came close once when I thought someone stole my Nintendo DS, but it turned out no one stole it — I just misplaced it, and the JC (Judicial Committee) did a good job at putting me at ease. They made me feel comfortable that they would resolve my situation, which they did.

Tay: Did you ever feel envious of traditional school experiences, like there was something important you were missing out on?

Sam: I think you always feel envious of an experience you never had, but I don’t think I ever felt like I should be at public school.

I think you always feel envious of an experience you never had, but I never felt like I should be at public school.

Tay: What have you been up to since you moved on?

Sam: I took a year to get some money together. I worked at a deli. It was a pretty good job. Then I went to New Zealand for 5 months to be an organic farmer, which is what I thought I wanted to do. But I realized it wasn’t.

When I came back to the states I started going to a community college. I ended up getting my associates degree in liberal arts, and now I go to Salem State University. I’m a senior majoring in communications with a focus in public relations and a minor in recreation management.

Currently I work for the Department of Conservation and Recreation in Massachusetts.

Tay: How is that going? Do you like it?

Sam: I really love my job and college is actually really fun. I think going to Sudbury Valley School and not really having a class experience has helped me stay motivated when people I know who have been in class their whole lives have lost some motivation.

Tay: Is there anything you’d want to say to parents who are considering this kind of school for their young kids?

Sam: You should send you child to a Sudbury School if you believe in your children. They have the ability to succeed, and if you believe that, they will do well at a Sudbury-model school.

Tay: You went to Sudbury Valley School for 4 years while you were a teenager. What drew you to that kind of school?

Cameron: It was my brother that brought me there. He’d been having a difficult time in public school. My uncle had attended Sudbury Valley School, so my mother thought it might be a better alternative for my brother. As he got involved, I learned more about the school, its system, and its people. I decided I wanted to attend Sudbury Valley too.

Tay: Was there a point at which you felt like it was a challenging place for you to be, because of how different it was?

Cameron: At times it felt challenging, but it was mostly because we were working on difficult social skills. We had the space and time to really develop these through natural life experiences. It would later help me in adult life, having honed my social skills at an earlier age than most people.

Cameron: Sometimes. Looking from the outside in, media and society really glorifies those events and experiences. Not being able to relate to others about those experiences can be disadvantageous, but I don’t think it devalues the experiences I did get.

Tay: What did you get out of Sudbury Valley School that you couldn’t have gotten in a more traditional setting?

Cameron: I learned at an early age what passion I wanted to follow into higher education and as a career. Also, the friends I made in this setting have lasted through college and beyond, which is not typical of traditional school friendships.

Tay: How did you move from the school into your career?

Cameron: I did research at Sudbury Valley School for university programs in my desired field, audio recording. Fortunately, there was a university nearby with a strong, technical program. However, the minimum requirements for the program were above my academic level at the time.

I don’t blame this on Sudbury Valley School, but rather my own work ethic. I decided to go community college to further my academics. I’ve become a big supporter of community college and think it pairs very well with an alternative education.

I directed my studies at community college towards what would be useful at the university program in Audio. I eventually transferred and earned a Bachelor’s degree from a four-year program. So college took six years, longer than most, but it earned me a career and position in a field I’ve dreamt about since I was fourteen.

Tay: So even though your college path took six years, you feel like you saved time because you knew what you really wanted to do?

Cameron: I don’t know if I saved time or money. In hindsight there were probably better ways I could have done it. What I’m proud of is that I did it by my own means. I knew how to direct myself to get to where I’ve gotten.

In hindsight there were probably better ways I could have done it. What I’m proud of is that I did it by my own means. I knew how to direct myself to get to where I’ve gotten.

My parents have always helped me, but never directed me. So while I’ve made mistakes trying to get to where I have, those mistakes were learning experiences. This is how education works at an alternative school.

Tay: So ultimately it’s about your sense of responsibility for yourself and how that self-determination got you to where you wanted to be?

Cameron: Yeah. I think that’s a very important life skill, and one that’s not easily taught. It has to be discovered. Alternative schools are conducive to helping children and young adults make this and other important discoveries.

That sounds pretentious, but I think if you grow up being told what to do, you’ll eventually run out of people telling you what to do and you won’t understand what it is that you want. Taking responsibility into your own hands also lends itself to owning up to mistakes and learning from them.

Failure isn’t a thing to be ashamed of, or to be punished for. Failure is how humans learn best and I don’t think traditional school systems are modeled with that in mind.

Tay: Can you think of a failure that taught you something you’re glad you learned?

Cameron: Always respect a system, but don’t forget to question it as well. It’s good to be skeptical.