Fail Early, Fail Often Kids learn a lot more from failures than they do from successes.

In April, The Open School hosted a dinner party in which staff and students cooked and catered a three-course meal for their families and friends. The idea began with my desire to have a home-cooked lunch at school using our campus’s kitchen, but when Tay, I, and a handful of students got to brainstorming, it quickly evolved into so much more.

We were going to have lasagna and breadsticks and salad, and of course dessert; we would dress in fancy clothes and drape tablecloths over the tables and light candles; we would open the event up to the community, and when we did that we would have to make menus and have waiters and servers! We were going to do the whole restaurant experience. It was very exciting.

What surprised me most about this whole affair was the tremendous amount of enthusiasm the kids had for working as servers. They needed no guidance on this account. As soon as the idea hit the table, they were off, creating menus, and later taking orders and carrying plates to guests. I think it’s because this is the aspect of the restaurant experience that the kids have seen over and over at real restaurants; they crave to imitate the real world. 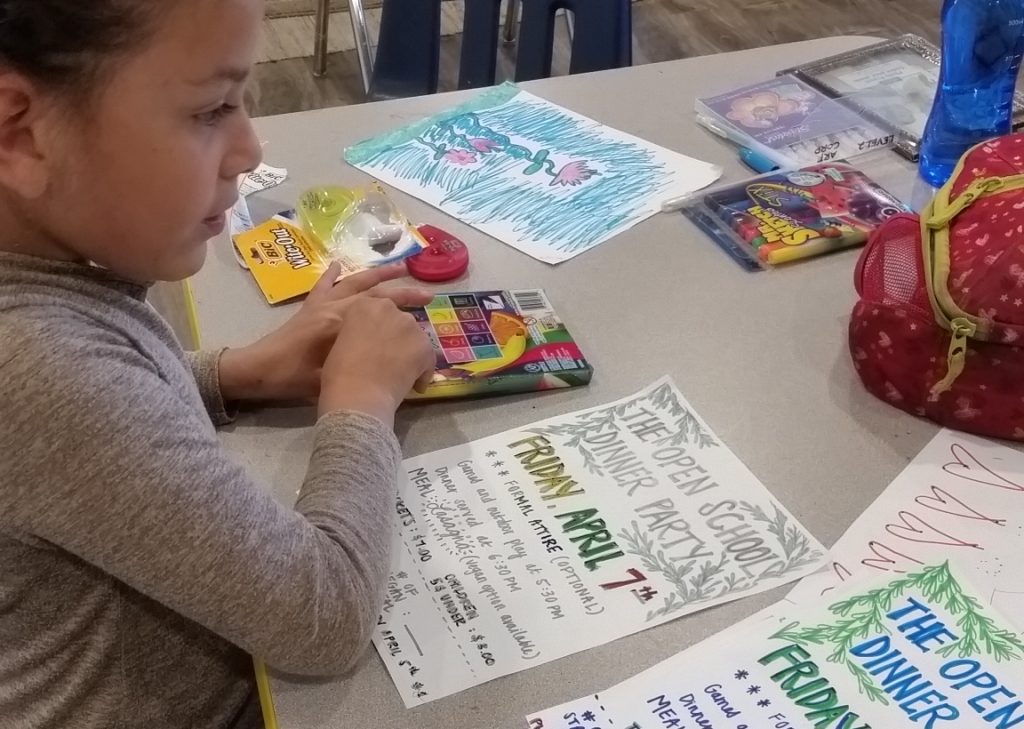 Well, let me get on with it and tell you how this all ended. It was a spectacular, beautiful train wreck. Part of it was that we had never before cooked for a group any larger than the eighteen or so members of the school, and now we had fifty or sixty to serve. But the trouble I want to highlight is the way the kids handled their roles as servers.

As soon as the dinner party got going, the kids hurried off excitedly to do the server thing. They quickly realized that they could not hope to memorize everyone’s orders and went to find paper and pens. Then they realized that even with paper, they couldn’t keep straight which guest ordered what and where the guests were sitting. They couldn’t agree amongst themselves which servers would serve which tables. They couldn’t, or maybe they didn’t realize that they needed to, keep track of which guests hadn’t yet been helped.

Needless to say, the hectic event was the wrong time to realize these things! Meanwhile the staff were all in the kitchen scrambling to get the food ready and were not able to stand behind the kids to coach them.

From a traditional educational perspective, this event was done all wrong and is a perfect example of why kids should not be given any real responsibility. They are ignorant and reckless. They thought they knew just what they were doing and they didn’t know what they were doing at all. But here’s another way of looking at it. Each of those kids now knows more about how to be a server than most adults. They learned more from the train wreck which they coordinated than they ever would have learned by watching an expert driver go safely from point A to point B.

They learned more from the train wreck they coordinated than they would have by watching an expert driver go safely from point A to point B. Click To Tweet

The corporate world is starting to adopt this failure-friendly philosophy as well. Dr. Astro Teller, the head of Google’s semi-secret research division, claims that his goal when developing technologies is to fail faster: “At Google X, failures come early and often, and that’s how they like it … Google X was designed to be a ‘moonshot factory.’ In other words, the research lab focuses not on incremental innovation, but rather on building risky, life-altering technologies.” Inventing in the modern world is arduous and expensive, and if an idea is not going to work, they want to find out about it sooner rather than later.

In my last post, Failure is the New Success, I told the story of Emily, the Open School student who started a corporation at school which ultimately lost money. Of that I said, “When we’re young, it’s easy to overestimate our abilities and get into trouble. I think that’s the purpose of childhood. I think that’s the purpose of school. We are allowed to make mistakes on a smaller scale, without being destroyed. We can get back up right away and try again. However, regardless of scale, the lessons are the same. Emily can learn how to run a business in this safe place, and carry her learning on to more high-stakes endeavors when she’s more mature.”

Sudbury-model schools like The Open School, which don’t have tests or grades or any other kind of systematic judgment, uniquely qualify as this kind of safe place for children. We will never chastise a child for failing.

This quality that children have, which compels them to rush recklessly into new challenges despite their profound ignorance, is no accident. The children are not stupid. They are learning, and they are much better at learning than we adults are. They know what Google X knows: that they can learn faster the more quickly and recklessly they charge into new situations. Our job as educators is to maintain a safe environment in which kids can be reckless without getting ruined. We needn’t worry about train wrecks like the dinner party, which will inevitably be remembered by all as great, thrilling adventures.