It’s a typical day at The Open School’s Civics Board. The first complaint was written by a girl named Rosie. DJ Cat, the 10-year-old Civics Board Chair, reads off the large, irregular letters produced by a 5-year-old hand. “I GOt OFF tNE SWiNG AND i WAS still HOlDING it AND STAR GOt ON.” DJ Cat then asks Rosie if she can provide any more details of the incident. “Write-ups,” as they are called, are a daily occurrence at The Open School, and are one of the main ways we deal with conflicts. Kids always write their own complaints if they are able, and they do it with enthusiasm.

The Open School is one of the exquisitely rare places in Orange County where kids are not formally taught to read or write. But it goes even further than that: we don’t care whether any of them learn to read or not, and this indifference offers them a safe haven from the normal cultural pressure to learn to read. Nobody will judge them or tease them for being poor readers, and nobody will praise them or reward them for reading well. This means that no student will study reading simply to please adults, and no student will feel embarrassed about his inability to decipher a text. We simply go about our lives; some people can read, and some can’t, and that’s that.

Now you’re feeling nervous, because certainly The Open School is churning out a generation of illiterate adults. But that’s not what’s happening! They are learning to read and write. Why, though? If no one is forcing them, why bother?

There is something powerful, and perhaps even mystical, to a child, about written language. To a child, language is the world; it is how they relate to the people around them and do everything that is important in their lives. Now here is a way to crystallize words; you can say something and then see it with your eyes. You can talk to people who are in different rooms and even different times. The words are never forgotten or misremembered.

It’s a small ritual at The Open School that when a motion is made at School Meeting, it should be read aloud by the motion’s sponsor. The students, even the poor readers, are always eager to read their own proposals, though usually an adult needs to point out where to begin on the huge wall of text which is the meeting agenda. 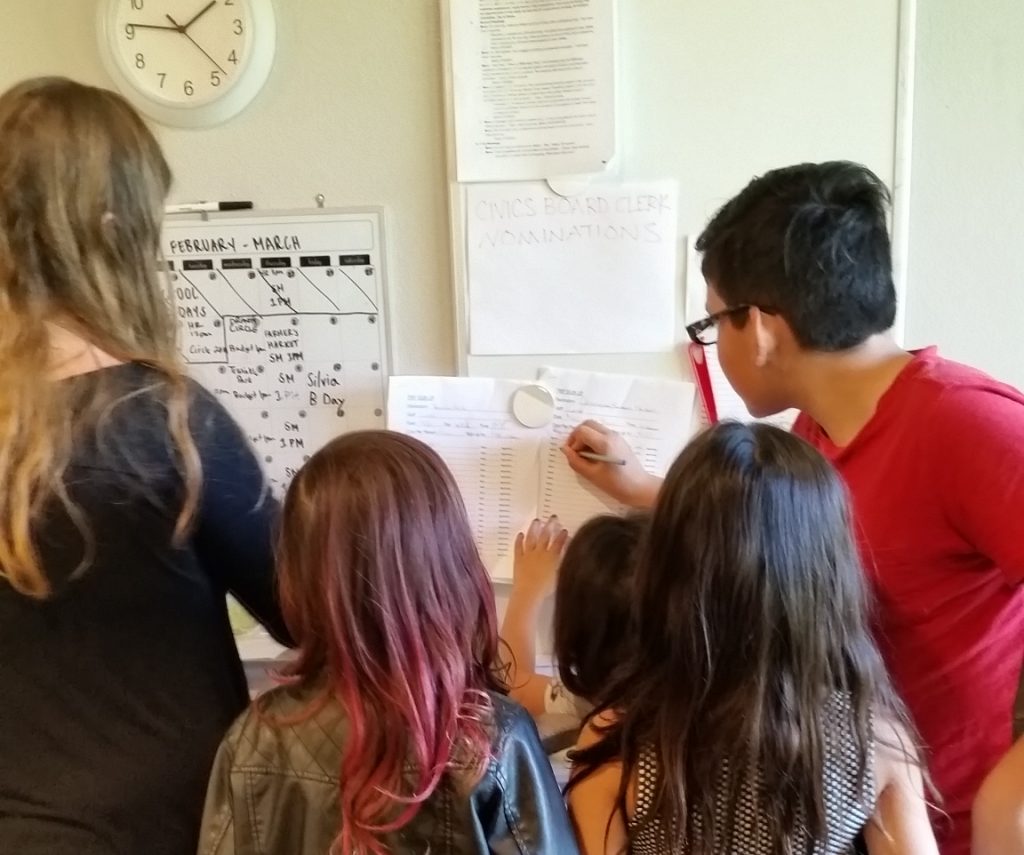 Writing plays a huge role at The Open School. It is like our second language. The walls are littered with text: rules, certification lists, sign-up sheets, field trip announcements, schedules, and judicial sentences. All business for both Civics Board and School Meeting is conducted in print. Even the digital world, which every student spends so much time in, is almost entirely text-based. Any illiterate person in this environment is going to feel a bit lost. So let me reframe my previous question: why wouldn’t the kids want to learn to read?

“How do you spell ‘my little pony coloring pages’?” asks 6-year-old Candy. She patiently types out the phrase letter by letter into Google as I instruct her. Later, 5-year-old Rosie asks, “How do you spell ‘shut up and dance with me’? Sh. Sh. How do you spell ‘sh’?” Star wants to know how to spell ‘beauty’ and ‘beast’. The questions go on all day, every day. Google is very popular here.

Meanwhile, 7-year-old Super is trying to navigate the menus on the Xbox. It’s critical that he chooses “exit and save” rather than “exit”. And when the Xbox asks if he’s sure he doesn’t want to sign in to Xbox Live, he has to decipher the question before he can select “yes” or “no”. Then he boots up Minecraft and has to select “creative mode” and not “survival mode”. Now he wants to spawn a sheep, but all the creature eggs look the same and the only way he can pick the correct one is by reading the names.

Sometimes kids just want to play with words. They write little messages on the whiteboard (“smile and have a good day”). When they discovered the school’s label maker, they made a bunch of funny labels for things. When the school hosted a dinner party, they wanted to help make invitations; they wrote down all the whens, wheres, and whats with colorful markers. Sometimes they want to do cool stuff with writing; other times they just want to play with letters the same way they play with Barbies or Nerf guns. 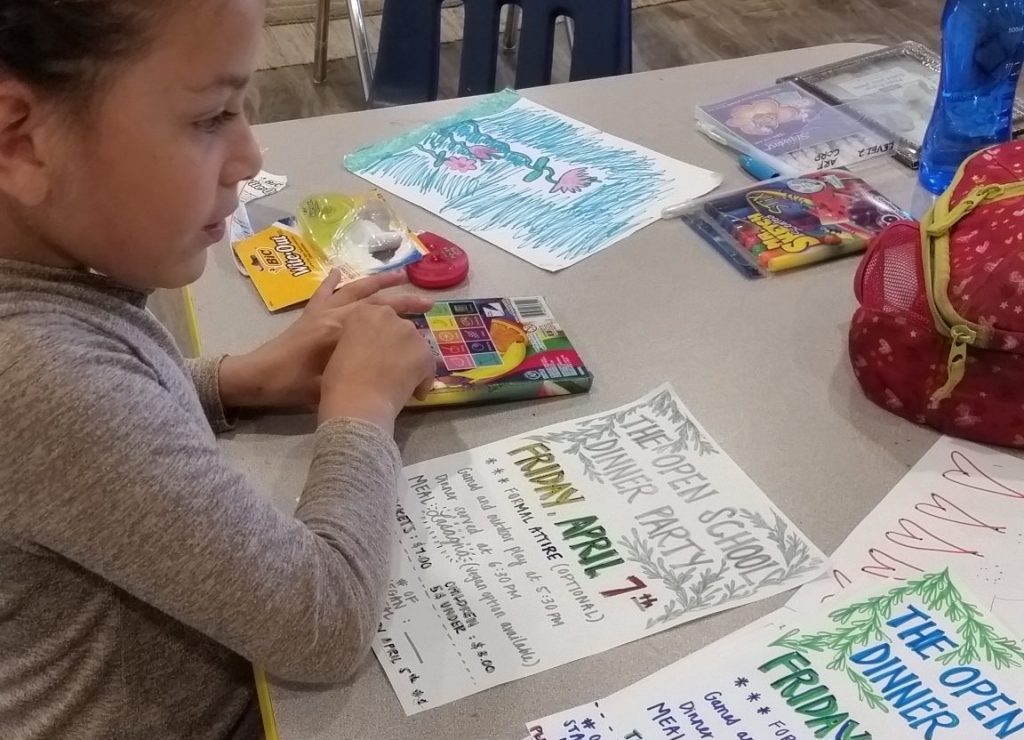 The tragedy of conventional education is that kids are taught that reading is for reading books, most of which are uninteresting to them, and that writing is for writing essays, none of which they decided to write for their own reasons. This causes us all to believe that reading and writing are little more than chores. Further, kids are taught that if you can’t read by age 7 there’s something wrong with you. This makes a lot of kids anxious about reading, which leads them to avoid reading for pleasure and to be distracted and nervous while reading for duty.

At The Open School, students correctly recognize that the written word is an exciting, powerful tool, and with determination and love they strive to master it. Today it’s write-ups and Google and Minecraft; tomorrow, when they’re teenagers, they’ll be crafting their own corporation bylaws, composing emails for the PR Committee, and writing screenplays. But their passion will be the same. And for those of them who decide to go to college, they’ll tackle entrance exams with as much determination.

I’ll leave you with an essay written by a graduate of Sudbury Valley School — an example of how a person can learn to write, and write well, without being taught or pressured. http://blog.sudburyvalley.org/2014/10/made-for-anything/

If you’d like to learn more about how children teach themselves to read, check out this article by Dr. Peter Gray: https://www.psychologytoday.com/blog/freedom-learn/201002/children-teach-themselves-read 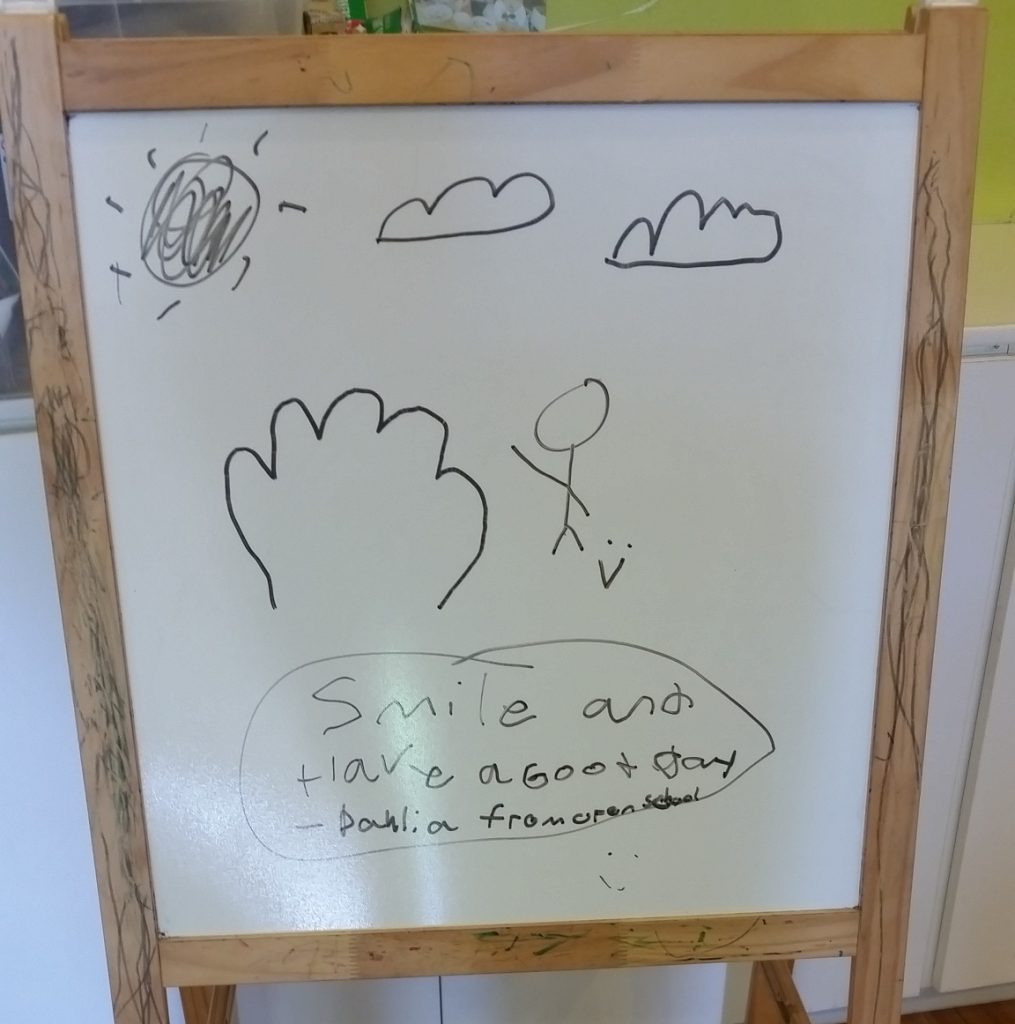