They are already responsible

As a staff at a young school, there are some days after which I feel exhausted and defeated. None of the students have been following the rules. I should write them all up, but I’ve already expended all my energy fighting them. It seems like they’re just not responsible people.

Friday was one of those days. Every Friday afternoon at The Open School, we have a Cleaning Party, at which every student and staff member helps clean the whole school. This is one of the ways we to cultivate responsibility in our students. We are a community, and part of being in a community is keeping the space clean.

What does this look like in practice? A few students want the school to be clean, and they go along with Cleaning Party without complaint. Other students are reluctant helpers, cleaning only while being watched and then only doing work in the most minimal way that can technically be considered work. Still other students are very clever in avoiding work completely, either by making themselves invisible, spending fifteen minutes to pick up a single piece of trash, or simply ignoring the fact that a Cleaning Party is going on around them and that a very frustrated Chore Checker is complaining at them.

This should sound familiar to anyone who has spent time in a traditional school. On Friday, I felt what many teachers must feel every day. I felt that the students who helped were good students, and the ones who rebelled were bad. They were irresponsible. They needed to be sent to Civics Board and given punishments so they would learn to be better.

As a Chore Checker, most of my time was spent hand-holding and guiding kids through even the simplest tasks, and on critiquing poor work. Even the students who enjoyed helping were overly dependent on my guidance. They were doing the minimum work necessary to get checked off, even if that meant going extremely slowly, taking frequent breaks, or manipulating me into doing part of the job for them.

For example, when I assigned Zack to pick up trash in the courtyard, he picked up four of the twenty pieces of trash which were present and then told me he was done and went off to play. I surveyed the area, counted the trash, then tracked down Zack and told him to try again. The second time, he picked up another four pieces of trash. This process repeated several times until the area was finally clean. Afterwards, I had spent a total of six minutes checking, while it would have taken me only two minutes to pick up the trash myself in the first place. It was a huge waste of time and felt very defeating.

Eric, a student, was the first person to get fed up with this. He made a motion at School Meeting: no more Cleaning Party. Those four words made the staff nervous. Without Cleaning Party, the school wouldn’t get clean on Friday, and when the church came on the weekend and saw their building a mess, they would not be happy. We might lose our school. The staff explained this very gravely to School Meeting, and afterwards the students were afraid too. And that was the end of that motion.

I like to think that The Open School is a place where kids can change the rules. But when reality comes knocking, we have to admit that sometimes adults know best and some changes are too dangerous to consider. Right? My sleep became troubled. My ideals about democracy and child empowerment were being challenged. One day, I finally asked myself the impossible question: What if Eric was right?

What an amazing question that is! Once I asked it, the answer was immediately clear. Our fear had been merely reactionary. If I were free from my duties as a Chore Checker, I could do the work of five unmotivated kids. Further, if students were offered wages for cleaning, they might actually take the job seriously and become efficient. They would apply their amazing cleverness to the task at hand rather than on avoiding it.

My plan’s success or failure depended on whether my prediction was correct. I guessed that when kids were given complete trust and respect, they would rise to the occasion. In the new system, there were no Chore Checkers. There were no supervisors! There were six cleaners, working in pairs, with each pair assigned an area and left alone to make it spotless over the course of an hour. DJ Cat (age 10) and I conducted real job interviews and hired students based on merit. Applicants came voluntarily and had to persuade us that they were worth hiring.

My prediction was correct. Even the kids who had been the most intolerable at the old Cleaning Parties turned out to be effective and hardworking. Kids who previously had trouble solving problems on their own were now applying their ingenuity and figuring things out. They still approached me from time to time, but only to ask for advice, and not to stall or get help. There was no complaining. There were no breaks. Halfway through we had staff shortages, which the remaining cleaners compensated for by working overtime without demanding extra pay (they were given extra pay anyway). Everyone felt good about their work, and at the end of it, the school was spotless. 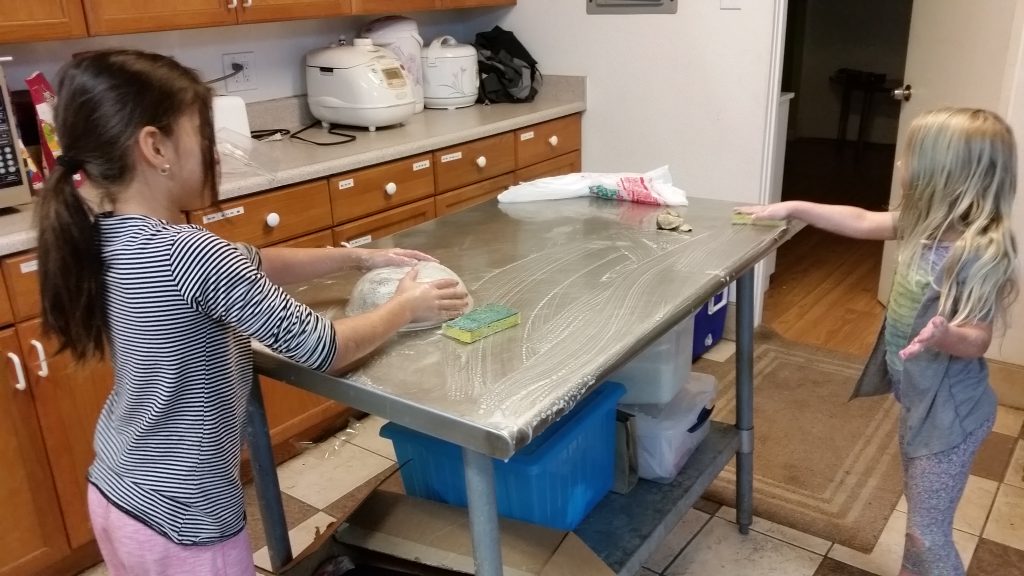 So it worked. This Friday I didn’t feel exhausted or defeated. I felt like I had developed stronger, more joyful relationships with the cleaners. But what about the philosophy? In this system, when do the kids learn responsibility? I don’t get paid for cleaning my house. Why should they get paid to clean their school?

I think the lesson here is that when kids are given complete trust and respect, they rise to the occasion. I will bet that the common image that kids are lazy is merely a byproduct of kids not being given enough trust and respect. Trust means that we don’t hover over them, scrutinize them, or micromanage them. Respect means we don’t coerce them with threats of punishment or accusations of immorality; instead we cultivate voluntary relationships based on mutual fulfillment of needs.

So are the kids learning responsibility? My answer is that they are already responsible. They have been all along.