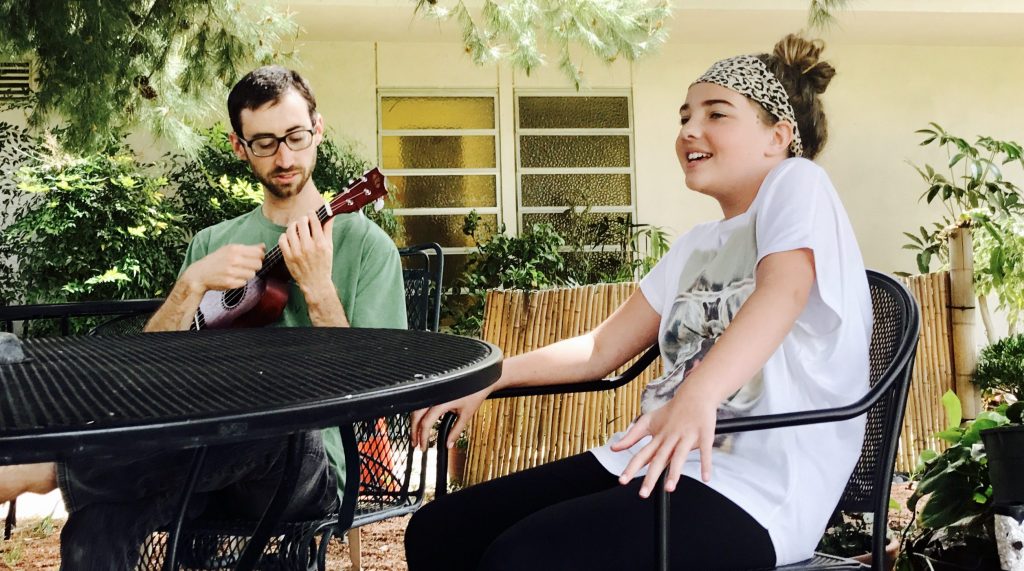 “Is that your guitar?”

I looked up from my strumming to see six-year-old Candy hovering over me. “It’s a ukulele,” I said.

I happily handed her the instrument and watched her pluck the strings. She was fascinated to be able to make such a pretty noise with her own hands.

Within seconds, several kids were lined up to have a turn. They carried the ukulele all over the campus, playing it here and there and always strumming the same chord, C, which only requires one hand.

Eventually, six-year-old Marco asked me to teach him a new chord. I showed him the next easiest one, F, and he spent a few seconds trying it out. Then he decided that F was too hard and it was back to C. Over and over. Here and there, all over the campus.

Candy took the ukulele onto the stage and pretended to be a rock star. Andrea said her aunt taught her to play the ukulele, so she already knew how to play it. She let me show her F, then she took the instrument and switched back and forth for a while between F and C.

And then it was over. The kids forgot about the ukulele, never asked about it again, and left me alone to practice my songs.

One day, I was playing my favorite ukulele song, a Twenty One Pilots cover of “I Can’t Help Falling in Love With You.” Ten-year-old DJ Cat sat across from me and started reading a book. I turned my volume down so she could have some quiet.

After a minute, DJ Cat put her book down and just listened. When I was finished, she asked, “What is that song?”

I told her the name.

She came over and sat next to me, and I handed her the ukulele. I showed her the easiest fingerings. Her fingers hadn’t yet developed the necessary strength, so it was hard for her to hold down the strings. But she enjoyed the sound of the instrument.

“What if I just sing, and you play?” she asked me.

I liked the idea.

I wrote down the lyrics on a scrap of paper. Then we went and found a quieter room, and she sang, and I played.

DJ Cat was nervous at first, but as she got more comfortable, she started to improvise a bit. We listened to different covers of the song and she picked her favorite one to imitate. Small audiences appeared and disappeared; some of them sang along softly; some of them danced.

At the end of March, DJ Cat showed up at school with a brand new ukulele of her own. She took me to a quiet corner where we wouldn’t be bothered, and there she played a song for me which she had written. It was a simple tune, but I was genuinely dazzled by its beauty.

She thanked me for listening, and we strummed together for a bit. Then it was back to our old routine, with me playing and her singing. Take my hand, take my whole life too, for I can’t help falling in love with you. Even though she could do both parts by herself now if she wanted to, she still wanted me to accompany her.

I was happy to oblige.

Some educators might have been disappointed in these kids: won’t let me teach them chords, not willing to do anything hard, won’t put in any work, lazy. But I don’t feel that way! At The Open School we follow our hearts. We pursue joy. Sometimes that looks like laziness to the untrained eye. But talent blossoms gradually.

And when it does blossom, it’s built on a foundation of love that makes anything possible.