My friend Princess Pine has never been to a Sudbury-model school before. She came all the way from Canada to see it with her own eyes. The place is eerily silent as I unlock the doors, and we stroll around the campus while I explain to her how we track sentences and vote on rules. I only staff one day a week, and I notice that things have changed since I was last here: new toys, new sentences, new rules, and new artwork adorning the bulletin board beside a list of nominations for next week’s election. Outside, a slack line stretches between two olive trees. I think about how dynamic this community is, and I take a moment to appreciate the beauty of such impermanence.

Sky is the first student to arrive. She wants me to come to school more often, and I struggle to explain why I’m not able to. She also wants a pony, but apparently there are certain difficulties with owning a pony. For example, ponies are afraid of the dark. I say she could keep it in her room, although it might break her bed. She doesn’t believe me. We find a laptop and ask the internet how much a pony weighs. 600 pounds. That’s pretty heavy! What’s the heaviest animal, Sky wonders. Well, that depends on what kind of animal. A blue whale is the heaviest overall, but the African bush elephant is the heaviest land animal, and the southern elephant seal is the heaviest carnivore. What’s a carnivore, Sky wonders. I explain and then on we go. The saltwater crocodile is the largest reptile, the Chinese giant salamander is the largest amphibian, and the largest arthropod is the Japanese spider crab. We squeal in delight to see pictures of the Flemish giant hare, a rabbit that weighs almost 30 pounds. Sky loves animals. When she grows up, she wants to be a veterinarian.

Sky joins three other girls who are playing Minecraft on the Xbox. They are working together to build a castle above the clouds, high enough so that it will never be rained on. Creepers won’t bother them up there. They lay down blocks of jade and lapis lazuli and adorn their digital home with torches and dragon heads. Nicole wishes there were pig and chicken heads in the game. She says those would be cute, but dragon heads might be better at scaring off creepers. The clock strikes 10 and it’s now Nicole’s turn to have the Xbox. There are five girls and four controllers, so the girls negotiate who will be left out. Christie is sent away, but another girl offers to let Christie play with her bike as consolation. 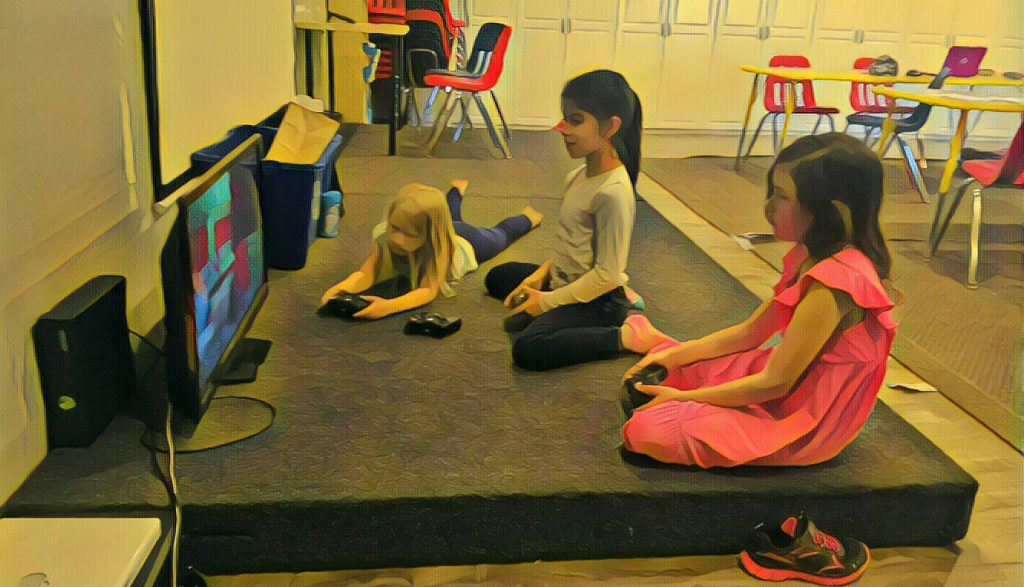 Amos shows me his new Nerf gun with all its modular attachments, and suddenly I’ve been drafted into a Nerf war. Alex, Amos, and I each select a primary and secondary weapon. I choose a shotgun and a revolver and we scatter around the campus. I tuck myself into a corner and wait silently. “I shot Alex,” Amos calls out. “I’m coming for you, Ben!” I’m still waiting, still silent. Amos cuts around the corner staring right at me and I fire two shots. We erupt in laughter and Alex appears and joins in. “He shot me right in the chest!” Amos yells between laughs. Four more kids come out and want to join the next round, so we organize teams.

Earlier in my life, the idea of toy guns in the hands of young people made me uncomfortable. Now I realize how much of that discomfort stems from my own projections. These kids aren’t going to become soldiers or criminals as a result of their Nerf guns. This is just fun. As I watch, I see older kids taking care of younger kids like a sergeant takes care of his platoon. It’s a war game, but also present is a tender caring. They are literally and metaphorically watching each other’s backs.

I’m serving on Civics Board today, and to my relief we only have three cases. One case describes how someone shut off the Xbox while someone else was playing Minecraft, thus destroying the house she built. Without a precedent, Civics Board discusses how we should legislate digital property rights. Has the defendant destroyed the complainant’s property? What is proper restitution? I’m amused to think of how our federal government is grappling with similar issues as we move into a more digitized world. We vote, the gavel bangs, and we adjourn.

After lunch, some prospective parents arrive. Cassi and I give them a brief tour and then we sit and chat with them in the garden. We describe how the school works and talk about the rapid growth in social and emotional skills we see in our students. The parents nod while their sons sprint around the school with nerf guns in hand, hunting down a staff-member-turned-zombie. I worry about what these parents are thinking, but I know there’s a reason they’re sitting in front of me. I think they know that their children will be accepted here just the way they are, even if that means they want to spend the afternoon in a zombie apocalypse.

After the prospective parents leave, a group convenes for Circle. It’s a tender and beautiful Circle, with students of all ages, interns, staff, and our visitor Princess Pine. We begin with dedications. Amos, who rarely attends Circle, talks about his pet dog who recently passed. The others respond by telling stories of their past and present pets. After everyone has told their story, Amos leaves; he just needed to speak about his grief, and to be heard. Circle goes on without him. We conclude with our closing ceremony, and then everyone scatters, leaving me and my friend alone in the room.

Princess Pine turns to me and admits she’s never shot a Nerf gun. She has a nine-year-old son who plays with them, but she doesn’t allow any at her house. She decides to go and ask the boys for a gun. When she asks, everyone runs off except Mark, a six-year-old patiently explaining to a 43-year-old woman how to load and fire a plastic weapon. Then she heads off into the fray, and I laugh to myself. No matter how old you are, this is a place where you can play, try something you’ve never tried before, have as much time as you need to make friends, and just be yourself. This morning Sky wished I would come to school more often. After a day like today, I might have to figure out a way to make her wish come true.