Where Everyone is Brilliant

When I got to school Monday morning, the plastic play structure in the front lawn was wrecked. One of the supports for the swingset was missing, so the top beam was sticking into the ground. The whole structure was half-sideways, diagonal. We rent our space from a church, so something crazy must have gone on here on during the weekend. Our students didn’t mind. To them it was a completely new playground. They spent the morning climbing all over it, and I came out to make sure it was safe. 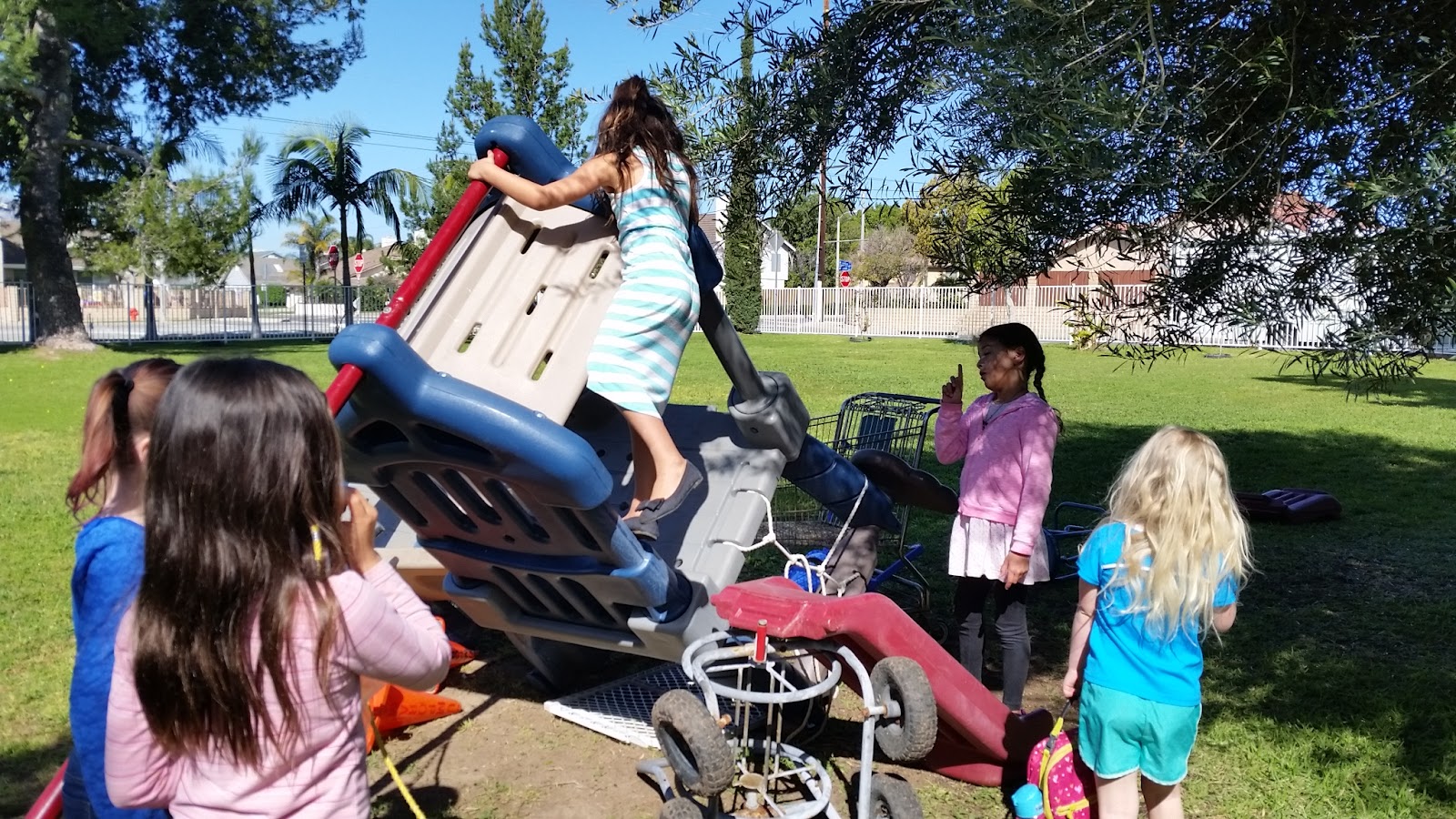 Star and Rose were nestled into the now-diamond-shaped space inside the structure. It was still early in the morning, and the campus was relatively empty and quiet. Star started asking me about my relationship history, and she managed to wring an embarrassing story out of me. Later, after the other students had arrived, Star began to yell my story out loud. “Hey everyone, Mr. Bacon had a girlfriend, and—” I cut her off, saying it was a secret, that I had told her my story in confidence. She decided to keep my secret.

Jacob came to school equipped with melee weapons. He had a large stick in one hand, and a plastic sword in the other. I asked when we were going to play melee-only zombie tag. The answer: “Right now!” It started with me as the zombie, and Jacob, Randy, and DJ Cat as humans. But pretty soon, we had nearly the whole school playing. The zombie’s goal was to tag the humans, but if a human touched the zombie with a weapon (a stick or plastic sword), the zombie became frozen for ten seconds. 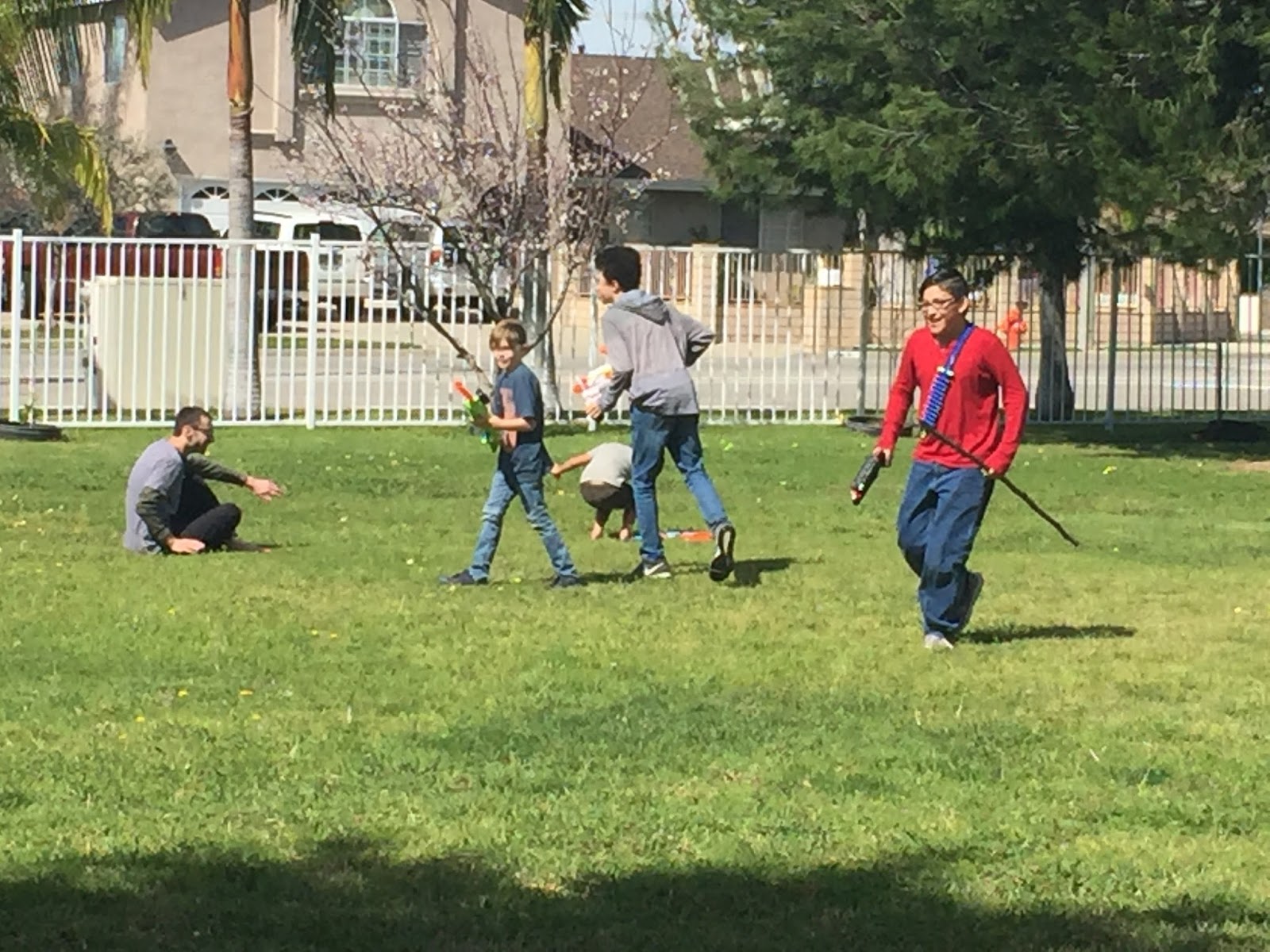 Jacob, with his enormous tree limb, was impossible to tag, so his self-appointed job was to defend the others who had smaller weapons or no weapons. A few times I managed to sneak around Jacob or break through to tag some of them, but we had so much fun that I agreed to stay the only zombie the whole time. The students got very organized, positioning themselves around the school to alert each other of my presence, and tried to keep Jacob at the front to defend the others.

Meanwhile, Cassi was having a meeting with a concerned parent. After the meeting, Cassi pulled me aside and we had a discussion about strategies for addressing the parent’s concerns. DJ Cat asked me if we could practice the piece we were planning for the end-of-the-year music show. She’s singing “I Can’t Help Falling in Love With You” and I’m accompanying her on my ukulele. We practiced for a while, and attracted a small audience. Star decided she wanted to do a piece with me too. She picked out “Hello” by Adele, and then we spent a little while learning the song before I got called to testify at Civics Board. I went and sat in on a couple of Civics Board cases, which were complaints I had written on Friday. However, I didn’t have to say anything, because the board was able to figure things out without my testimony.

After lunch, I got pulled into an imagination game with Diego. We pretended we were dragons, trying to escape an attack from a horde of unspecified enemies. He and I headed into the parking lot at the back of the school, where a group of kids were sitting in a circle. DJ Cat called me over and asked if I wanted to join her club. Apparently, it was a club where people have to be nice to each other. She called it “Help These People.” Intrigued, I sat down in the circle, which consisted of about half the school. Randy wanted to call the club “The Lab.” He had already made a sign, which he now hung on the wall. DJ Cat called a vote to determine the club’s name. “The Lab” won by a narrow margin. The members of the club took turns on an open mike, telling each other jokes.

Naturally, kids at The Lab frequently got into conflicts with each other. DJ Cat told them to be nice. This was a club where you had to be nice to others, even if you didn’t want to. The members of the club understood this principle, but they still had conflicts. For example, Nick sat in Star’s seat after she got up, and she pleaded with him to give it back. Who was right? The kids realized that being nice is not enough to achieve harmony in a community. They made appeals to the school’s law book instead. I said nothing through this whole process. I felt privileged to be allowed to observe kids building a society and solving social problems without any adult input.

I left The Lab because I hadn’t seen Crystal all day, and I wondered what she was up to. I found her in the courtyard and hung out with her for a few minutes, until Star found us and complained that I had spent hardly any time with her all day. Star and Crystal were best friends in the midst of a week-long fight. They hadn’t spoken to each other in days. Now, they had a brief argument before Star began to walk away. I was frustrated with them after all this time, since they had been driving a wedge through the school community with their fight. I called Star back and asked if the two of them enjoyed being enemies. They got defensive and started arguing again, talking over each other and accusing each other of countless unforgivable crimes.

Their argument led them to recall an incident that happened a while ago on the playground. They wandered over to the playground and started talking about what had happened between them, patiently now. I noticed that they really wanted to be friends again, and were willing to work through whatever hurt feelings they had. I left, having never said anything beyond the original question. When I saw them again at the end of the day, they were laughing and playing together.

As I write this, I realize that The Open School is a place where everyone is a creator, and everyone is brilliant. We each have something to contribute. We construct our culture together. This is not a place where adults hold all the wisdom and children are expected to merely sit quietly and listen. Nor is it a place where children magically grow and develop in a vacuum, where the adults are expected to keep their hands off to avoid contaminating their perfect young minds. Instead, people of every age are all equals. After so much time in these walls, we forget the notion that staff and students are different from each other in any fundamental way. We are all just community members, being together joyfully while at the same time minding our own business. It is in this way that we can all learn from each other without imposing on each other; where we can nurture trust, develop our individual identities, and be comforted knowing that when we feel we need help, someone who cares is never far away.